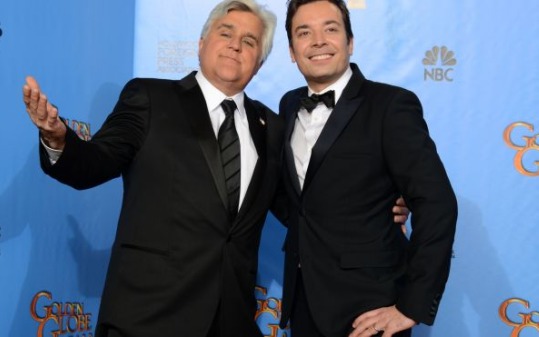 NBC anointed Jimmy Fallon as host of the “Tonight” today, replacing Jay Leno even though he’s number 1 in the time slot. The change came two weeks after NBC declared war on Leno, and Leno fired back in daily monologues. On Monday, the network released a video of Fallon and Leno singing “Tonight” to each other from “West Side Story.”

Clearly, weekend negotiations had brought the whole mess to a conclusion. Leno isn’t even waiting until the end of his contract in September 2014. In February, before the Winter Olympics air on NBC, Leno will bow out. When the Olympics are over, Fallon will appear at 11:35pm live from New York, not Hollywood.

This afternoon everyone is quoting from a cheery press release of harmony. Interestingly, NBC completely skips over the eight months in which Conan O’Brien had the job. He been deleted, Soviet style, from the history of “Tonight.” So has Leno’s debacle of a show at 10pm, and the payout to O’Brien of around $50 million. O’Brien just renewed his own contract with TBS for his 11pm late night show, which is going strong.

Leno is making jokes now about returning to stand up comedy, or working in his garage. (He’s famously a car collector.) But don’t be fooled. Leno will be back on the air by September 2014, whether it’s with Fox or a cable channel, or in syndication. The latter choice may be more difficult since there are others who’ve gotten deals with local stations. But Jay Leno’s advisors will figure it out. He carries with him the largest late night audience.

And what of Fallon? I’ve always said he reminded me of Steve Allen and Jack Paar rolled into one. His show is sophisticated, fun, and young. Coming from New York, with Lorne Michaels producing, and with the “Saturday Night Live” synergy, the “Tonight” show with Jimmy Fallon is going to be a big success and a pleasure to watch. The one person who will find it a headache will be David Letterman. Competition for booking guests will be as intense as it is between “Today” and “Good Morning America.”