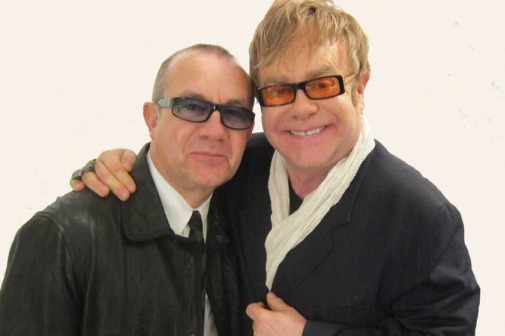 Elton John and Bernie Taupin are receiving the Johnny Mercer Award from the Songwriters Hall of Fame. This is a special award to songwriters of the highest merit who are considered the gold standard. This is exciting news because the songs from this duo really are in a league with the legendary Mercer. And what a night the SHOF will be on June 13th, with Berry Gordy getting his own Lifetime Achievement Award, and the inductees including Steven Tyler and Joe Perry, and Mick Jones and Lou Gramm, as well as JD Souther and Holly Knight.

Jimmy Webb said of the duo in a statement: “Some catalogs are more ‘deep’ and significant than others not only because of their pertinence to the times in which they were written, but because their sheer mass is overpowering.  It’s just not that easy to write 40 Top 10 records.  It’s kind of like swimming the English Channel with your hands tied behind your back. Elton’s readily identifiable melodic piano style has proven to be a perfect accompaniment to Bernie’s razor sharp lyrics about relationships and living on the edge of life both in good and bad times.”

PS Look at these catalogs of songs from all these songwriters. Without them, we’d have nothing. And given what songwriting is like now, we’re going to be hard pressed to find new honorees for these kinds of awards in ten years. Songs now are sampled, interpolated, lifted, stolen, and worked on by committees. Very disappointing.