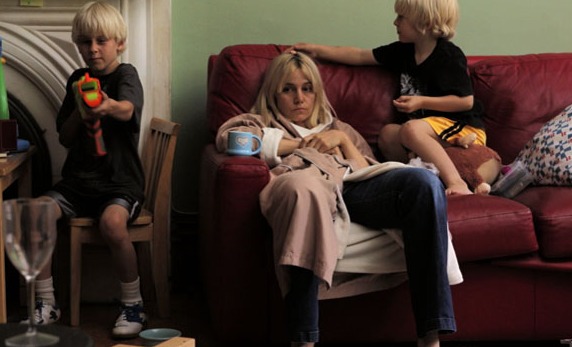 BY PAULA SCHWARTZ, SPECIAL TO SHOWBIZ411– Ryan Gosling slipped into the second row of the Walter Reade Theater in Lincoln Center Saturday night to catch Shannon Plumb’s “Towheads,” which was screened as part of the New Directors/New Films festival. Plumb is married to Derek Cianfrance, who directed “The Place Beyond the Pines,” starring Gosling and Bradley Cooper, and which opened Friday. (Box office is impressive; it’s raked in $270,000 in four theaters.) Cianfrance also directed Gosling in “Blue Valentine.”

Probably few people even spotted the Oscar-nominated actor, who was with friends. There was no sight of girlfriend Eva Mendes. After the movie, Gosling raised his hand and asked a question in the Q&A.

Cianfrance’s “The Place Beyond the Pines” focuses on fatherhood, responsibility and legacy. “Towheads” is the other side of the coin. Plumb, a video and performance artist, wrote, directed and starred in an impressive and enjoyable film that celebrates motherhood. At the same time her character struggles to find her purpose and identity in life in addition to being a mother and the wife of a famous director.

Plumb, who is the star, the director and the screenwriter,  has a real gift for physical comedy. She plays a Brooklyn actress and overtaxed mother named Penny, who spends most of her day caring and doting on her impish and energetic sons, Cody, 4, and Walker, 7 (Plumb and Cianfranc’s real-life sons). Meanwhile, her husband Matt is a busy theater director (played by Cianfrance), who is too self-obsessed or distracted to give her any emotional support. When Penny seems to be having a meltdown, he asks if she is having a midlife crisis and suggests she get a facial. Then he dashes off to work, which he points out supersedes everything else because it pays the pills. The camera never directly films his face, which is obscured by cereal boxes or books. (The film was shot in the couple’s rambling and comfortable cluttered Brooklyn apartment.)

Working with a miniscule budget, Plumb said there were few takes and she didn’t storyboard. Although there was a script, the children’s scenes were all improvised. Her sons worked only four hours a day and of course she found herself always “overly protective.” There was also some resistance at first by her impish boys. “On the first day Walker quit,” Plumb said. But they ended up loving it. “When it was over, they were sad at the end. They were crying.”

Although she’s a well-known visual artist she’s new at the film business. She didn’t know how to shoot a movie.  “I didn’t know anything but low angle. I put the camera down here,” she pointed low. “I never moved a camera before. Derek tried to sketch something out real quick,” she said, but, “It would drive me crazy.” The best advice he gave her: “Keep it simple.”  The fact is she’s made an savvy film that witty, fun and smart.

When an audience member asked during the Q&A  if she’d ever gone experienced a breakdown like the character she plays, Plumb replied, “Certainly I’ve experienced a crisis for sure. You panic. The children always come first and they come first until 9 at night,” she said. “And all of my friends, they’ve all gone through it. It’s harder for moms. It’s crazy but you get through it. That’s what this (film) is for as well.”

Plumb made it clear the unsupportive husband in the film was not based on Cianfrance. “He’s not my real husband. He’s nothing like that.” When she first envisioned the husband, his role was  “just to open a door and close it,” because, “I wanted this to be a mother’s story. I wanted it to be about the mom. It could be a single mom, a mom who has a husband who works all the time, who could be any mother,” she said. “The husband is a stereotype of the 50’s, 60’s kind of man.”

Finally Cianfrance decided he would play Plumb’s film husband because of a bedroom scene.  “He didn’t want anybody sleeping in his bed,” Plumb said. So she told husband, “If you want to do it, fine,” and his reply, “Yeah maybe I should do it,” worked out. “I’m so happy he did. He’s a good actor. I didn’t know he was so good,” Plum mused. “I didn’t know he could act, but he can,” she laughed.

Part of the humor is how Plumb finds Beckett-like absurdity in every day events and situations, whether it’s to tear open a box of cereal, hold up a tampon box or drink out of a curly straw. She has a tour-de-force moment in a disaster of a gown big as a mountain, where she struggles to sit and then stand in sky-high platform heesl, while no one around her, including her husband – Cianfrance backlit –  even notices her.

Plumb is lanky and loose-limbed and fun to watch, whether she dashes down a busy street with a stroller, pushes a kid’s bike while she balances a  gown or her head, or makes unsexy and inept moves as a pole dancer. Meanwhile she’s a quick change artist, changing costumes and characters and genders, including one hilarious scene where she leaves her apartment dressed as a man, dons a mustache and puts on a  masculine swagger. She’s obviously been inspired by Charlie Chaplin and Buster Keaton. And this last scene, where she leaves her home disguised as a man made an impression on Gosling, who plays a macho guy with tattoos, muscles and guns in “The Place Beyond the Pines.”

During the Q&A, Gosling asked: “You play so many scenes as a man. What’s the key to playing a man?”

Without referring to him by name, Plumb replied, “When I went to acting school my teacher told me, if you want to walk like a man you’ve got to separate your legs, and walk like this, loose.” Plumb demonstrated and swung her legs wide apart as she walked. “It’s starts physically, then you become a man, so I just started. It’s so amazing to step into those shoes to see what it’s like,” being the other half. “Men are fun to play.”

Someone asked if things would have worked differently for her character if she had had a daughter instead of sons. Plumb replied thoughtfully. “Yeah. It’s a whole different thing. It’s a different dynamic. It would have been different I think. I do want a daughter but I’m not having anymore,” she laughed.