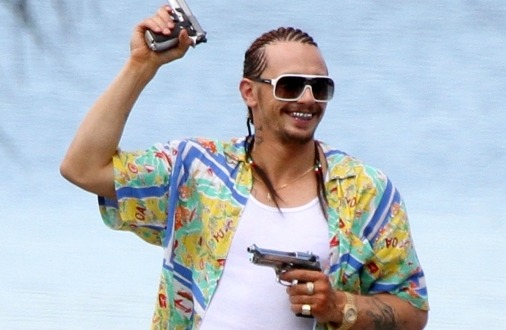 Friday night box office: “Spring Breakers,” the witty  Harmony Korine sex fest starring James Franco, beat “Admissions,” the panned comedy about getting into college — and the former was in 1,000 fewer theaters. “Spring Breakers” is turning fast into a cult comedy of sorts and deservedly so.

You don’t think it works, but it does. And Franco is memorable– in a very good way. “Admissions” was panned by critics even though it stars TV darling Tina Fey and the always likeable Paul Rudd. Only Lily Tomlin was praised for her efforts. “Admissions” made just over $2.062 million last night, and will be lucky to score three times that over the weekend. It’s playing on 2,104 screens. “Spring Breakers” made $2.1 million on 1,104 screens.

Franco now has 2 movies in the top 5– the indie “SB” and the major major “Oz, the Great and Powerful.” And he did all those extra things while filming them–all those things everyone gossips about like teach and attend schools.

Each of these films, by the way, beat “Incredible Burt Wonderstone,” which took in just over a million dollars and looks to be a total write off. The Steve Carell-Jim Carrey feature has reaped $14 million. It cost the usual $100 million to make, at least, although many of the players have agreed to back end participation since the studio is only owning up to $30 million. Whatever happens, none of those people did the movie for free, and someone’s going to have to pay them.