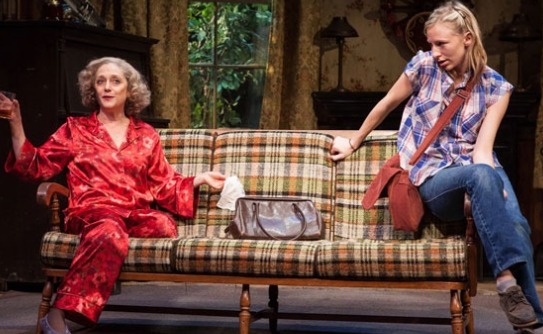 Tonight Craig Lucas’s “The Lying Lesson” opens off Broadway at the Atlantic Theater Company on West 20th St.– and Bette Davis is back. In this play, it’s the early 1980s, Ronald Reagan is president, and Bette Davis has come to Maine to buy a house. This is imagined history because Davis and husband Gary Merrill did own a house in Maine from 1953 to 1960. And Bette was born in Lowell, Massachusetts. But in “The Lying Lesson” it seems like she’s returning to the place of nostalgic summers. And she runs across a young girl who may or may not be telling her the truth while Bette awaits closing on the house.

Carol Kane, who was once Miss Davis’s New York neighbor, plays the great Hollywood star. Making what constitutes an official stage debut above the title is Mickey Sumner as Minnie, the local girl who is hiding a lot. The play is two hours and at times a little uneven, although Lucas has fun with Davis’s past rivalries, especially the one with Joan Crawford.

But this is not an exaggerated impersonation. Carol Kane — Oscar nominee, Emmy winner– is too smart to walk around declaiming “What a dump” or “fasten your seatbelts.” There’s none of that. I always think of Carol Kane is a wacky, wicked comic actress. But she plays Bette Davis as a human being, very nuanced, and altogether likeable. She’s no monster here. Of course, she’s older, too. But Kane gives her three dimensions, and it’s very refreshing. Even if you’re too young to know Bette Davis (and some in the audience were last night) Kane invests enough to make Davis a new character.

Sumner will quickly shake her back story–she’s the daughter of Sting and Trudie Styler. But there’s no nepotism here or whatever. I’ve been watching her grow off Broadway into an accomplished actress. Everyone will see how good she is come April in Noah Baumbach’s “Frances Ha.” With her Maine accent and shlubby clothes, Sumner melts right into Minnie. There’s no awkwardness or self-consciousness. It’s very edifying to watch her. I do think Mickey Sumner is following in the wake of Lily Rabe. We’re going to see more and more of her very quickly. She’s got ‘it.’ And she holds her own with Kane. For a first timer, that’s no small feat.

Last night Anjelica Huston and Amy Irving were each in the audience. “The Lying Lesson” isn’t perfect but it’s going to be one of those hard to get tickets after its official opening tonight.