The big New York City art shows brought out the A list this weekend, even if it was just to look around and take stock. At Pier 92, in the Modern Art exhibits, I ran into a top notch trio: Grace Hightower DeNiro, George Lucas and fiancee Mellody Hobson. The “Star Wars” creator certainly had two dynamic companions with him. 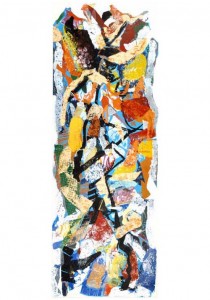 Also spotted: actor Norah Emmerich, of the F/X show “The Americans,” fielding tons of compliments from fans of the hit show. Noah’s late father, Andre Emmerich, was one of the world’s most famous art dealers; and MTV co-creator John Sykes.

Meanwhile, over at the actual 67th St. Armory today: Yoko Ono got everyone’s attention. So did John Leguizamo, who got so comfortable at one of the booths, he left his jacket in their closet so he could roam around unfettered. Also seen: Ron Howard partner and producer Brian Grazer, of Imagine Films fame.

My favorite piece: this John Chamberlain print was only $17,000 at Pace Prints. A bargain, certainly!