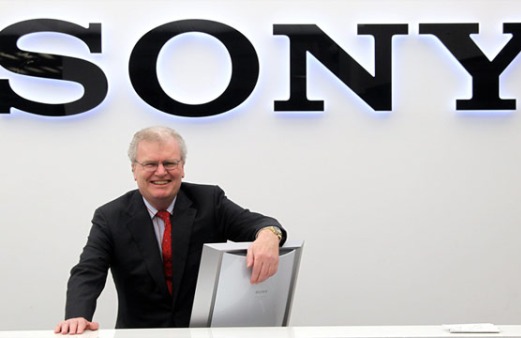 One of the great people in the media world, Sir Howard Stringer, has announced his retirement. Stringer, 71,  told a group at the Japan Society tonight that he will retire in June. Stringer has led Sony through a lot of changes. Sony Pictures and Sony Music have thrived under him. The only part of the company that’s struggled is electronics, as Sony has never really come up with a way to compete with Apple. Once, the Sony Walkman was in everyone’s hands. Then the DiscMan. But the iPod and iPad really rocked Sony’s world. (I do love their TVs and laptops, though.) Stringer leaves Sony Music in very good shape, and Sony Pictures is solid with movies like “Zero Dark Thirty,” the Spider Man series, and, of course James Bond via MGM. Recently, they sold their headquarters building on Madison Avenue. Last year, trusty CFO Rob Wiesenthal left for Warner Music. And now Stringer will cede power. He’s been with Sony since 1997, and CEO since 2005. Personally, I will miss him. But it’s not like he won’t be back, and soon, with some great project.

Watch this Video: Amazon Chief Jeff Bezos Is Going to Be a Rocket Man Next Month, Taking His Brother on 11 Minute Flight

Apple Next? Microsoft is Closing All its Retail Stores Including Fifth Ave in NYC, No More Crowds Testing Computers During Pandemic