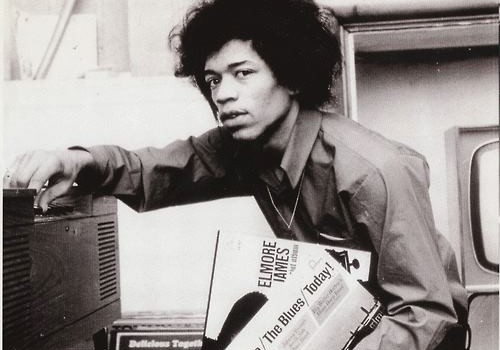 Jimi Hendrix’s big moment lasted just about four years– 1967 until his death in 1970. Forty two years later, we have a “new” album painstakingly put together by his estate and his producer, Eddie Kramer. Considering how many reissues and “new” albums have come out over the years, you might be skeptical. I know I was. But “People, Hell and Angels” is an unexpected treat. I recently heard the single “Somewhere” being played on KLOS in Los Angeles and it stood out from the usual unmusical junk that clutters up today’s airwaves. I almost pulled over, I was so distracted.

“Somewhere,” like all the tracks, was unreleased, and has remained so for these four decades. Amazing. For one reason or another, all of these songs just hadn’t made it. Hendrix’s estate has always been in court. But now “People, Hell, and Angels” appears on Sony’s Legacy label in a beautiful CD package. You could download it, but the liner notes, etc are so nice to have! The histories of each track are worth reading about, believe me.

Most of the tracks were recorded with Buddy Miles on drums and Billy Cox on bass. But do listen to “Somewhere,” because Stephen Stills plays bass. Yes, it’s the Stills from Crosby Stills, and Nash. Now we get an explanation for the bluesy sound of CSN especially on the first two albums, where Crosby was folk and Nash was pop. Hendrix returned the favor and played on Stills’s first solo album in 1970.

But mostly it’s Hendrix, with superior sound, mixed up front, sounding like a champ. He’s the influence for four decades of funk, soul, jazz. There’s just so much packed into every thought and nuance of his playing you wonder what everyone would be doing now if he hadn’t existed. This is so real, and so wonderful, a gift.

New Hendrix this week, new Bowie next week? OMG as they say these days. And there are also terrific new releases from Boz Scaggs and Eric Burdon. You see, it’s not over yet!