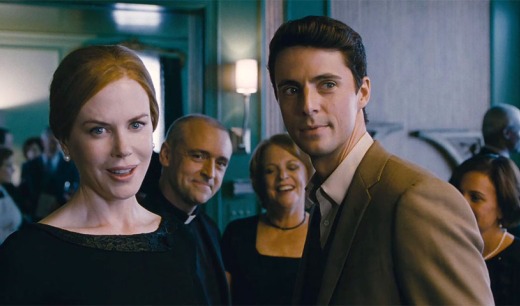 The Pope and the Vatican are always ‘in’ no matter what Mel Gibson and his father say. Now, with a new pope about to be chosen, and one that retired suddently, it’s a good time for Showtime’s new series, “The Vatican.” Matthew Goode, who will star in the series, spoke with our PAULA SCHWARTZ at the press junket for his new thriller, “Stoker.” Goode said that actor Bruno Ganz (“Wings of Desire,” most famously) will likely play The Pope in the first episode. Ridley Scott is directing the show, which is a big deal. There’s no script yet, according to Goode, but it’s being written as fast as the smoke comes up out of the Vatican this week. Also, Anna Friel has joined the cast as well.

Goode, by the way, is very good, as usual, in “Stoker,” which also features a nifty turn by Nicole Kidman, who shines in what is otherwise a convoluted thriller. Matthew Goode is one of our favorites from “Match Point” and “A Single Man.”

Showbiz411: The timing for “The Vatican” couldn’t be better a journalist pointed out.

MG: Very weird because I was making my mind up between that job and another job, which I won’t disclose…and that happened that day, so that’s kind of a sign in a weird day. The casting’s really got me. I love Kyle Chandler. He’s amazing. And Sebastian Koch. Hopefully Bruno Ganz can play the Pope in the first episode (“The Counselor” and “The Reader”).

Showbiz311: The actual Pope is not busy anymore.

MG: I’m not sure how good he’d be remembering his lines.

MG: This is the funny thing, I’ve never signed onto anything before where you have the pilot and it’s like, “And then we’ll write it.” What do you mean? What the hell’s my character?” It’ll be really interesting but Paul Attanasio is the writer, he’s such a cool guy, and I loved “Quiz Show” and “Donnie Brasco.” He’s a pretty extraordinary guy, so I think, even he’s like, “I don’t know what’s going to happen.” (Goode said with an American accident.) Wow! Figure that out would you? It should be exciting. Hopefully it will go to series. And it’s nice for me as a parent, it’s going to shoot in Rome the first bit, and then it’s going to move to London, so I’ll be home, which will be easier.