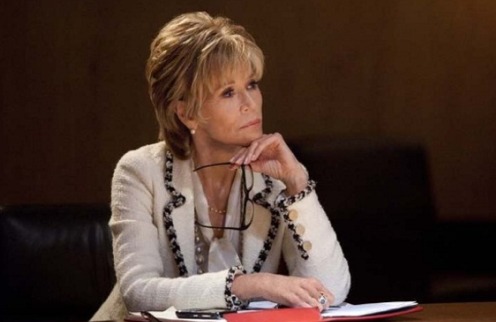 I liked the “Boob Song” on the Oscars last Sunday, but, I’m a guy, and it seemed okay to me. Then my friend Jane Fonda, who is smarter than me especially on these subjects, explained why it was wrong on her blog.  Fonda, who stole the Oscar show in a yellow Versace gown, didn’t look too happy by the time she and Michael Douglas– who costarred in the classic film “The China Syndrome”–  presented Best Director to Ang Lee. I could see she had other things on her mind. She wrote later about the Oscars:

“What I really didn’t like was the song and dance number about seeing actresses boobs. I agree with someone who said, if they want to stoop to that, why not list all the penises we’ve seen? Better yet, remember that this is a telecast seen around the world watched by families with their children and to many this is neither appropriate or funny. I also didn’t like the remark made about Quvenzhane and Clooney, or the stuff out of Ted’s mouth and all the comments about what women do to get thin for their dresses. Waaaay too much stuff about women and bodies, as though that’s what defines us.”

And it’s not like Jane isn’t fun or into subversive humor. But she’s right, and we–Seth MacFarlane and I–are wrong. Jane was recently on Piers Morgan explaining to a substitute host why it was important to protest Violence Against Women on Valentine’s Day. The host–a woman–wanted to know what Jane thought women should buy men for Valentine’s Day gifts. I couldn’t help thinking that Jane–who again, didn’t look so pleased–must have been wondering if any progress had been made since her character in “The China Syndrome”–some 30 or so years ago–wanted to do serious news instead of cover bake offs.

Our LEAH SYDNEY covered the Women in Film gathering over Oscar weekend. Women In Film is important because they’re always trying to raise awareness of the message Hollywood sends around the world about women. Last Sunday the message was– it’s’ funny to sing about boobs. In private, maybe, or at a comedy club. In front of a billion people, no.

Oscar winner Octavia Spencer and producer Cathy Schulman co-hosted Women In Film 6th Annual Cocktail Party, sponsored by Perrier-Jouet, M.A.C. Cosmetics and MaxMara at Fig & Olive.  Spencer’s “The Help” co-stars Viola Davis and later Jessica Chastain came out in support. Octavia waxed poetic about Cathy and how hard she works for women’s betterment in Hollywood.  Spencer then told the VIP crowd that, “if it wasn’t for so many women paving the way for a funny looking black girl with crooked teeth from Montgomery Alabama, I wouldn’t be here. These visionaries made it possible for me.  Hey, I’m not Halle Berry.  I like the silver linings in life.  I’m a forward thinking person, I kind of have to be.”

Cathy told us: “According to as study commissioned by the organization, in the last 11 years, only 41 of 1,100 films have been directed by women. It’s actually a horrendously terrible statistic. ”

She later told the crowd “Kathryn Bigelow’s success should be the norm, not the exception.”