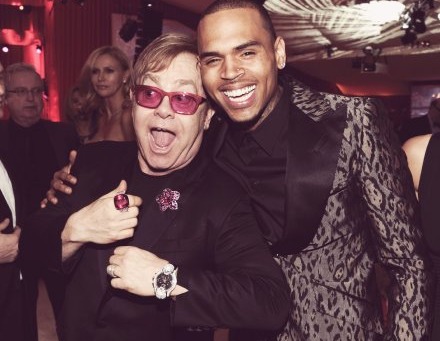 LEAH SYDNEY reports: Elton John and David Furnish raised $6 million last night for their AIDS foundation at the annual Oscar dinner. They did have some help: Hugh Jackman was the c0-chair and British sensation Emeli Sande put on a sensational show.

Jeffrey and Marilyn Katzenberg came in after the Oscars, with his humanitarian Oscar in hand.  Elton’s husband David Furnish told them that Sande was a fourth year medical student in Glasgow before she was  “discovered.” Katzenberg proclaimed himself an instant fan.

Elton held court with all, he proclaimed Seth McFarlane as “clever.”  Chelsea Handler agreed and said he was “just terrific.”  The lovely Lainie Kazan told us she’s off to New York to receive a cabaret award. Judy Greer told us that she’s playing the Betty Buckley part in the remake of  “Carrie.”  Judy quipped, “I’m swinging that whistle!”

Greer, who just finished a short Broadway with Katie Holmes, is writing a book. The working title is, “I Don’t Know What You Know Me From,” and she just wrapped her fourth season on “Archer.”

Chris Brown was very chatty and posing with anyone that asked him.  One guest noted, “he was the friendliest person of the party!’  Go figure!  And no one we know of was harmed.

EJAF has raised $300 million over 20 years–quite an accomplishment–and all of it has gone to AIDS research and helping people living with AIDS.