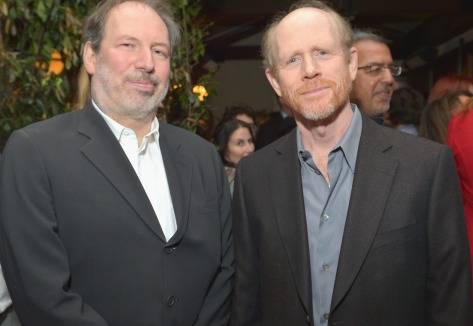 Showbiz 411’s LEAH SYDNEY caught up with Ron Howard at the Vanity Fair and Fiat’s ‘Una Notte Verde,’ cocktail party at Cecconi’s in West Hollywood Thursday night.
Ron co-hosted the soiree with composer Hans Zimmer to benefit The United Nation’s International Labour Organization, the ILO. Vanity Fair Publisher Edward Menicheschi welcomed Michael Moore and his wife Kathleen who brought the (previously detained at US Customs) Palestinian filmmakers from “52 Cameras.” Also there:  Chuck Roven, Lake Bell, Adrien Brody, Josh Hartnett, Alyssa Milano, Sanaa Lathan.
Howard was low key and self effacing as usual. He said actress daughter Bryce Dallas Howard was just getting back to work after having her second child. And he came and went without handlers, just being his affable self and representing his company, Imagine.
Showbiz 411:  What have you been up to Ron?
RH: I’ve been busy..mostly this past year I was in Europe. But It was a really good Oscar season to come home too and catch up with a  great bunch of movies.
Showbiz 411: Anything you’re rooting for?
RH: The ones I voted for but I can’t tell you!
Showbiz 411: What were you working on in Europe?
RH: A movie called “Rush” which comes out in September, which stars  Chris Hemsworth, Olivia Wilde, Daniel Bruhl .  Hans composed the score.  It’s a true story based on the rivalry between the race drivers James Hunt and Niki Lauda in 1976.  Very cool era.  Very dramatic with complex characters, written by Peter Morgan who did “The Queen,”  “Last King of Scotland,” and “Frost- Nixon” that we did together.  Look for it, I think you’ll like it.
Showbiz411: Were you a fan of the films this year?
RH: I think it’s been a really good year.  Steller actually.  A lot of movies were made this year that people are going to be referenced for many years to come. Whether you’re a filmmaker or not, you’re going to talk about movies like “Life of Pi,” “Argo” and “Lincoln.”  These are going to be movies that will be referred too for a long time.