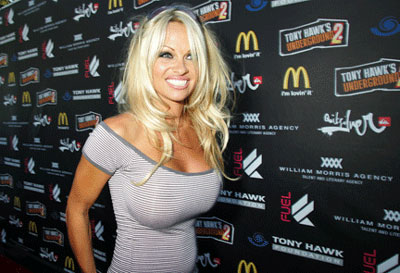 But as big a star as Elton is, the momentary star of the night had to be “Baywatch” legend–yes, she’s a legend–Pamela Anderson. All I can say is, thanks for the mammaries. Pamela arrived alone, did a turn through the big room, had her picture taken in front of the Richard Prince paintings imagining the old West, and departed alone on her stilettos.

Anderson is something to meet in person. She’s probabloy 5’2″, but adds about four inches in her rockin’ shoes. She wore a clingy peach colored dress that emphasized her magnificent bosom. She’s a beautiful woman and a blow up doll who looks like a million bucks.

She is suntan orange. I don’t know if it’s sprayed on, or applied by drooling servants. But yowza. In a room full of women who were dressed in drab art gallery black, Anderson was like a bolt from the heavens. She is her own work of art. It’s kitsch art. But there is absolutely nothing wrong with that. She was incredibly pleasant, and gracious. Why was she there? Is she an art collector? We may never know.

Anderson was not the only celebrity in a room that was a curious combination of the famous, the infamous, the notorious, Hollywood hangers on, has-beens, will-be’s, won’t-be’s, and who knows what.

But the group that deserves mention includes Oscar winner Adrien Brody with his statuesque Russian girlfriend clad in a dress that may have been designed by Rubbermaid and just covered her curvaceous bum (she was actually very nice) and poised atop silver stilettos; as well as Fran Drescher, Jared Leto, John Sykes, Very Wang, fine actor Ronald Guttman and his bw Amy, Robbie Robertson, “Les Miz” director Tom Hooper (who seemed a little horrified), John Waters, and Gagosian collector Peter Brandt. There were plenty of artists, too, including father and son Ed Moses and Andy Moses. The group decamped to Mr. Chow for their annual dinner– too much to contemplate given the eclectic nature of the room.