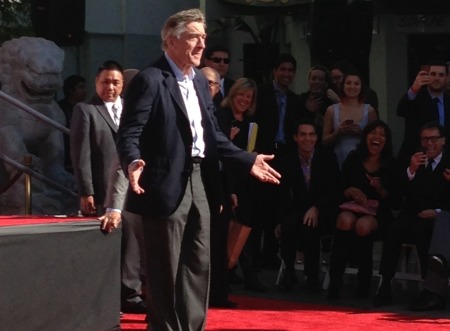 Oscar voting has closed, so I can say this: Robert DeNiro can do anything. And so now, the nominee for “Silver Linings Playbook” is taking on his bravest project yet. He’s going to direct the Broadway musical of “A Bronx Tale,” the movie he directed in 1993. Chazz Palminteri, who wrote the original movie and acted in and the Broadway play (which he also wrote), is writing the book for the musical now. David Bryan of Bon Jovi, who won the Tony for “Memphis,” is writing the songs. (Expect a lot of doo wop– they should call Richard Perry.) Sergio Trujillo — of Jersey Boys and Addams Family fame– is working on the choreography.

I know all this because the one and only Tommy Mottola is producing the musical, and he told me all about it yesterday. (Mottola is in partnership with Broadway’s The Dodgers.) Tommy and I were talking about his own musical memoir, the autobiography called “Hitmaker” in book stores now. Mottola called me from Miami where he’s working on two more books–including one about the Latin culture and “the whole demographic.” Mottola is also working on a musical version of Curtis Mayfield’s “Superfly,” directed by Bill T. Jones– aimed for Broadway next winter. Curtis Mayfield is hot hot hot–first “Sparkle,” now “Superfly.”

Well, Tommy is a man for all seasons. And he’s reinventing himself as a Broadway tycoon, a new David Merrick. And let me tell you, he’s going to do it, too!