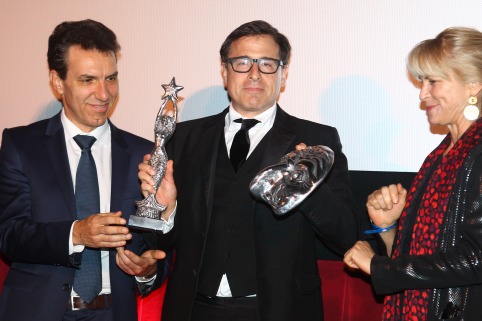 Earlier: It’s taken 14 weeks–14 long weeks– but “Silver Linings Playbook” will cross the $100 million mark probably by Tuesday, Wednesday at the latest. As of last night David O. Russell’s exceptional comedy-drama has made $98,462,000. And that’s not counting healthy foreign ticket sales of $40 million. Unusual? Yes, because it’s a finely wrought comedy with dark undertones. And this weekend, when it should have dropped off a bit, “SLP” did over $6 million. I have a feeling there’s a lot of repeat business.

It’s also the first movie since Warren Beatty’s “Reds” in 1981 to score all the major Oscar nominations–all four acting noms, Best Director, and screenplay. Jennifer Lawrence is the odds on favorite for Best Actress, and I said in Toronto that Robert DeNiro could win Best Supporting Actor. Russell picked up Best Screenplay/Comedy, Musical at BAFTA.

The fact that “SLP” is crossing the $100 million mark is exceptional because it languished in limited release for a long, long time. Now it’s on a roll. From the beginning nearly everyone who saw it loved “Silver Linings.” It’s the only Best Picture nominee that leaves a lump in your throat. And while the family in that Philadelphia house seems to be out of control, they are anything but– Russell turned them into a beautiful little quartet. Cooper, DeNiro, Lawrence, and Weaver are outstanding.

Russell missed the red carpet tonight in LA at the Writers Guild Awards-West. And even though “Argo” won Best Adapted Screenplay, Russell, our LEAH SYDNEY reports, was welcomed like a winner. (Russell later picked up an Award at the LA-Italia festival. That’s where the picture is from above.)

Two more days to vote for the Oscars. Academy ballots must be back by Tues Feb 19th at 5pm. And even if “Silver Linings” doesn’t win Best Picture, its box office numbers assure it — along with its many accolades and rave reviews– of status as an instant classic.