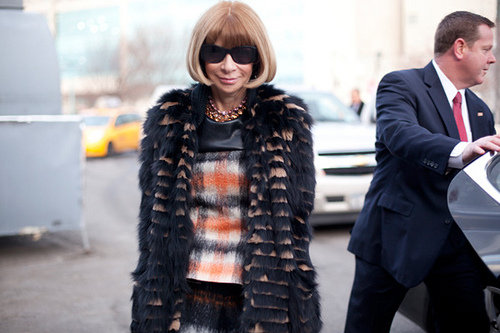 It’s a big news week for magazines, as Time Inc. tries to offload most of itself — including People, Entertainment Weekly, and the insufferable In Style– to Ladies Home Journal publisher Meredith Company. But the other big news is that Anna Wintour has suddenly lost the two people she was closest to, and came with her to wrest Vogue from Grace Mirabella back in 1988.

First Keith Kelly reported in the Post the startling news that Laurie Jones, who actually hired Wintour at New York magazine, and was then brought to Vogue by Wintour when she got it, is leaving at the end of this month.

Jones was managing editor all these many decades, keeping the place running straight while everything undermined her. Her departure could be a natural retirement or exhaustion. But then it’s coupled with this news: that Andre Leon Talley, the giant of all fashion editor-writers, is also overboard. ALT has been with Conde Nast since the early 80s, and with Wintour since her first day at Vogue.

Is it a coincidence in these times of cutbacks that the two most tenured people at Vogue–other than Wintour and Grace Coddington–have left the building? Maybe it’s all without plan. But it feels a like just a few months ago when Time Inc. lost John Huey and Terry McDonell in a mad rush for the exit doors. Drastic cutbacks followed, then the new story of the sale. Just sayin’…The mag business proceeds through a perilous time….

PS Both announcements were made just as Fashion Week concluded.