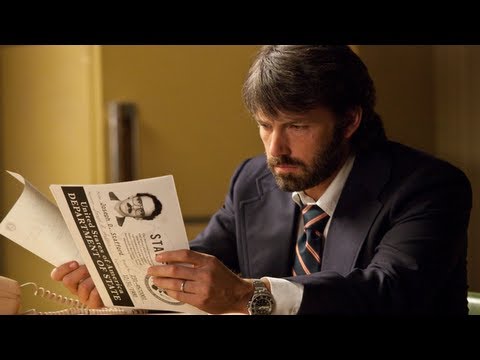 UPDATE It’s been suggested before, but I am hearing it more and more: Academy voters with paper ballots may be writing in Ben Affleck’s name as Best Director. It’s a crazy scenario already. “Argo” is a favorite for Best Picture. But its director, Ben Affleck, isn’t on the ballot. Neither, of course, is Kathryn Bigelow, Quentin Tarantino, or Tom Hooper for their Best Picture nominated films. This may have something to do with the electronic voting in the first round this year. Now many who didn’t want to deal with computers have switched back to a paper ballot. And one way to cure the Affleck dilemma is just to write his name in.

One problem: write in votes have been banned since 1936. So don’t throw away your Best Director vote.

This has been an odd season for Oscar voting, something we’ll get into when it’s all over. I watched both “Argo” and “Lincoln” on the plane back to New York the night before last. “Argo” is superb filmmaking. It’s an exciting film. And boy, that last twenty minutes or so — the whole sequence of getting the six Embassy workers out– is exciting. The cutting back and forth to the film lot in Hollywood, the phone ringing and no one there to pick it up–it’s great.

And still, watching “Lincoln” again is very instructive. I love that movie. And not just the main players, who are all very good. But the levels and levels of casting, from Hal Holbrook and James Spader to Michael Stuhlbarg and Walt Goggins. Even the little subplot going on between Sally Field and Gloria Reuben makes you take notice of them. “Lincoln” really boasts a rich array of performances, and a screenplay by Tony Kushner that just gets better and better.

Still, I come back to “Silver Linings Playbook.” The script is very subtly constructed, which is why it just won the BAFTA award. And the interplay between Jennifer Lawrence and Robert DeNiro in the key scene–in which Tiffany enumerates her relationship to the Eagles winning and losing–should win each of those actors Oscars. It’s absolutely a classic.

What a year for films–the best I think in more than a dozen years. Oscar ballots are due back to the Academy next Tuesday, February 19th.