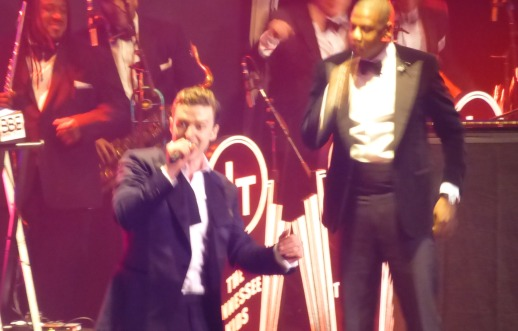 I like Justin Timberlake and I enjoyed his big comeback show at the Hollywood Palladium last night. So I was a little shocked when at the end of almost two hours, Timberlake at last spoke to the audience. He said: “I love you Los Angeles, I love each and every one of you. And don’t let the stupid fucking media tell you otherwise.”

Through almost two hours of energetic dance music, Timberlake had not spoken to the wildly happy crowd of 4,000-plus fans–most of whom were jammed like sardines onto the floor of the Palladium. Some, like yours truly, were up in the balcony where there were leather benches to sit on. The bass was so overdone that the benches shook as if they were vibrating furniture from the Sharper Image.

But the audience didn’t seem to mind the lack of modulation or communication. They loved everything Timberlake did, whether it was a hit like “Cry Me a River” or “Rock Your Body,” faithful covers of the Jacksons’ “Shake Your Body,” or INXS’s “I Need You Tonight.” Timberlake, dressed in a sharp suit and untied bowtie, very Rat Pack, channeled Michael Jackson, Prince and Robin Thicke, as well as a little Daryl Hall. He avoided doing any ballads, which is too bad, because it would be nice now to hear his voice challenged. He can do it. He has the chops.

Timberlake also failed to show his sense of humor, or any of the wit that we’ve seen on “Saturday Night Live.” Again, this was a surprise. He just delivered the songs, one after another, without comment. He also makes a near fatal mistake by using a guitar and a piano as props he’s supposedly playing. He’d be better off sticking to singing. Elton John or Billy Joel, he clearly isn’t. And just as he did years ago, he insists on playing his guitar with his back to the audience. I would just drop all this aritifice and stick to what he does best.

Jay Z and Timbaland were special guests last night. Justin will announce a tour starting in late summer of arenas, with Jay Z. I’m already buying earplugs. Jay Z is the guest star on Timberlake’s soulful single, “Suit and Tie,” which I think is a terrific record. Unfortunately, Justin performed it last night at twice its regular speed. Please, let’s hope he can that back to its proper, delicious pace. Nevertheless, it’s clear that he and Jay Z like each other. They have a natural rapport. That ticket will be very hot this summer.

I have no doubt Timberlake’s album, “The 20/20 Experience,” is going to be good. And the tour, from Live Nation, should be a huge hit after some tweaking. (How about clips from those Andy Samberg videos? Or Timberlake in skits>)

But the “stupid f—ing media” would like not to be insulted if Timberlake is going to achieve these goals. We’ve always liked him. I had no idea he hated us so much. Where is all this anger coming from?  Maybe it’s time for a new publicist. Justin, no one thinks you don’t like your audience.

PS Seen at the show: Selena Gomez, Hunter Hayes, Neil Patrick Harris, Beyonce (Mrs, Jay Z). Mrs. T, Jessica Biel, must have been down front or backstage. Selena Gomez– I spoke with her. What a nice girl. She’s working on a new album. Her “Love You Like a Love Song” was a great single. There’s a lot to come from Selena…