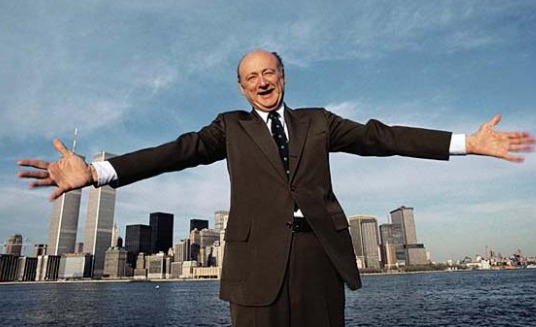 Ed Koch died this morning, he was 88 years old. I have the honor of getting one of his last, contentious emails. He sent it on January 7th after I reviewed the documentary about him, “Koch.” The mayor, whom I used to see regularly in the neighborhood, wasn’t happy that I pointed out he was visiting his grave in the film, that it already an inscribed headstone, and that it wasn’t in a Jewish cemetery. He wanted to be buried in Manhattan, he said, and no Jewish cemetery was accepting new burials. He wanted to be where the action was.

When he was mayor, he was the action. In his first term, 1977-81, he saved New York after Abe Beame left us for dead. In his second term, Koch continued his programs, and New York became “the city that never sleeps.” In his third term, he was out of control, the outer boroughs crumbled, the drugs situation got out of control and homelessness and begging was epidemic.

But think of it: he was so brash that he was the subject of an off Broadway musical. He wrote a bestselling autobiography–in the middle of his long administration. He’s managed to leave a documentary behind, timed to his death. He was intrepid. In September he went to Barbra Streisand‘s return to Brooklyn concert in a wheelchair. He never stopped writing movie reviews and sending them out. Sometimes they were on the money. Maybe he was emblematic of New Yorkers. He didn’t care what anyone thought about him even though he was famous for asking “How’m I doing?” He really didn’t. He was cantankerous and outspoken, told everyone what to do, and revealed little about himself. He made it impossible for anyone ever to forget Ed Koch.