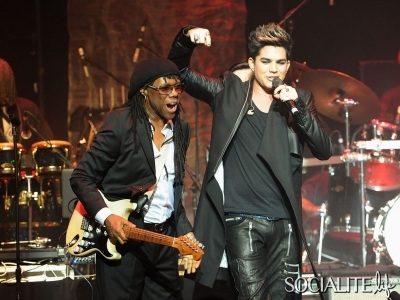 A New York night: not only did Liza Minnelli and friends celebrate the 40th anniversary of “Cabaret,” but movies were opening and charities were raising money.

Uptown: Jude Law, Rooney Mara, Channing Tatum, and Catherine Zeta Jones premiered Steven Soderbergh’s excellent little mystery thriller, “Side Effects.” Scientology will lose this movie. It’s very anti-psychotropic drugs. Jude and CZJ are shrinks, Rooney’s depressed even though she’s married to Channing. He’s just of jail from insider trading. There’s a neat unexpected twist about twenty minutes into the film. Soderbergh announced in his intro that he was taking beta blockers and feeling fine. I think it was a joke. I had no idea people take beta blockers for fun, but it’s mentioned in the movie along with Zoloft, Wellbutrin, and a half dozen other antidepressants. Jude Law is sensational — Soderbergh has him just right. CZJ is sharp as a villain. I ran into the star of Fall 2013, Oscar Isaac, on the way in….Jill Hennessey also on hand… and our old friend, Polly Draper, of “thirtysomething,” has a big part in the movie! She still has that sexy voice and looks terrific. Bravo! Plus Michael Douglas, Mr CZJ (so to speak for one night) in fine form…

Midtown: Famed record producer and musician Nile Rodgers, leader of Chic, and b.w. Nancy Hunt started the We Are Family Foundation in 2001 right after 9/11. Every year they throw a jubilant fundraiser at the Hammerstein Ballroom. This year’s was supposed to have been on October 30th but Hurricane Sandy got in the way. Last night they picked up where they left off, and it was the most fun night. Adam Lambert, Grandmaster Flash, Mel Melle, performed with Nile and Chic (with Fonzie Thornton!), turning the Hammerstein into Studio 54. There were lots of cool guest and performers, from Taylor Dane ( she still those pipes!) to Rosie Perez, Bebe Buell, architect David Rockwell, photographer Timothy Greenfield-Sanders, Montell Williams, Kate Pierson of the B52s, a bubbly Sean Young and assorted Real Housewives.

There’s something magical about We Are Family (www.wearefamilyfoundation.org). They build schools, sponsor all kinds of pro-tolerance activities, and do a great job. Nile and Nancy deserve much kudos. Plus the music at their events is worth every penny and more!

Next event: April 11th, with Sting and Trudie Styler.