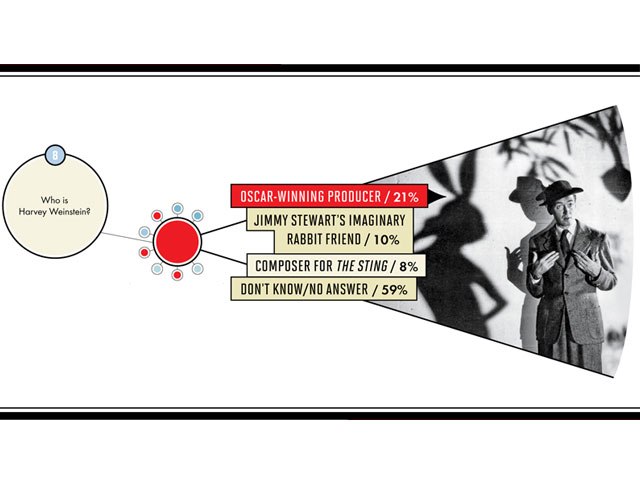 I’m impressed: one in five Americans, 21%, know who Harvey Weinstein is. That’s a lot of people who know the name of a Hollywood mogul. The Vanity Fair/60 Minutes poll is a hoot, especially because it’s ridiculous but fun. Some people thought Harvey was the imaginary rabbit from “Harvey” with Jimmy Stewart. Others thought he was Marvin Hamlisch. (Believe me, the right people know who Harvey is, kids.)

Sounds like the people who answered skewed older since many of them picked Cary Grant. Bette Davis and Humphrey Bogart as their favorite actors. www.vanityfair.com According to the poll, 46% don’t like foreign films, and most people would like the number of awards on the Oscars cut down. Good news: Denzel Washington and Halle Berry each polled very high. Meryl Streep and Clint Eastwood, they say, are our favorite actors. But the movie they starred in. “The Bridges of Madison County,” wasn’t really a hit or very memorable.