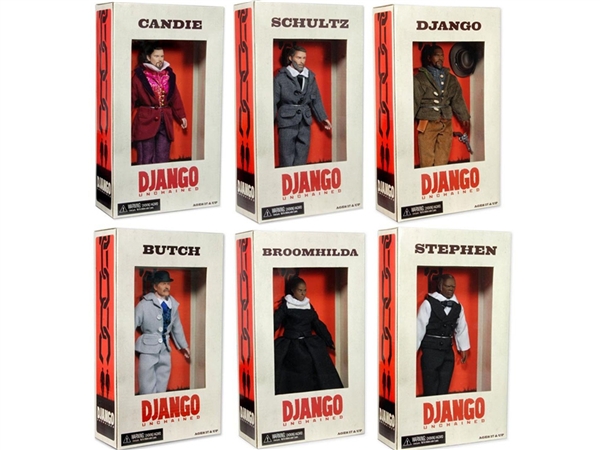 UPDATE FRIDAY JAN 25TH: eBay is pulling the “Django” dolls from its service. We broke this story this past Tuesday. See below.

Earlier: The action figures made for Quentin Tarantino’s “Django Unchained” were pulled from stores in the last couple of weeks. Some people found them offensive, an uproar occurred, and the “Django” dolls became history. Or not.

Now it seems that whatever dolls were made by NECA are selling well, like hotcakes, on Ebay and other internet sites– even though NECA has removed them from their website as well. The most popular is Broomhilda, the character of a slave girl played by Kerry Washington. It’s hard to say why, but the Broomhilda action figure is selling for upwards of a thousand dollars to collectors.

The dolls shouldn’t have been made; they were inherently racist and there were dozens of complaints. But pulling them off store shelves created a collector’s market overnight. Some sites are offering the full set of 8 figures for anywhere between $8,000 and $15,000. It remains to be seen who will pay those prices, but collectors obviously think someone will.

The dolls, 8 inches tall, represent characters played by Jamie Foxx, Christoph Waltz, Leonardo DiCaprio, Kerry Washington, Samuel L. Jackson and James Remar. The figures for the five men come in sets ranging in the thousands of dollars. But the Kerry Washington figure — if it can be found– is often advertised at a price equal to the total of the others. It’s hard to say whether or not that’s a compliment as critics have derided the dolls for commercializing slavery.

It’s unclear how many dolls were manufactured, although one site suggests that only 1,000 sets made it to stores.

Meanwhile “Django Unchained” has become Quentin Tarantino’s most successful film to date with over $130 million box office office sales so far. It’s also the biggest movie for the The Weinstein Company, whose other $100 million-plus hits have been Tarantino’s “Inglorious Basterds” and the Oscar winning “King’s Speech.”