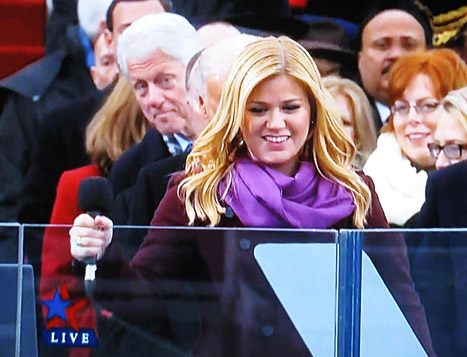 The music from the Inaugural ceremony and the balls show on TV are making one thing clear: Sony Music has all the major presidential artists. Kelly Clarkson, so good on “My Country Tis Of Three,” is on RCA-Sony. She’s one of Clive Davis’s artists from J Records and “American Idol.”

Jennifer Hudson, singing “Let’s Stay Together,” also comes from Davis roster and is now on RCA. Ditto Alicia Keys, who performed a rewritten version of “Girl on Fire” (still using the uncredited music from “Hey There Lonely Girl”).

And there’s more: Beyonce, who I thought was so-so (although she looked amazing) is on Sony. And James Taylor has most of catalog on Sony.

Jamie Foxx, now performing on CNN at the Inaugural Ball, is a Clive Davis find and a Sony-RCA star. (He’s doing his Ray Charles material.) I will never forget Jamie debuting his musical talents at a Clive Davis pre-Grammy dinner several years ago. The audience was gobsmacked. The rest is history.

PS Hudson’s version of Tina Turner’s take on “Lets Stay Together” was wonderful. Hudson should just do an album of great cover songs–including her “Holly Holy” Neil Diamond tribute from MusiCares and her “Will You Be There” from the Michael Jackson memorial.