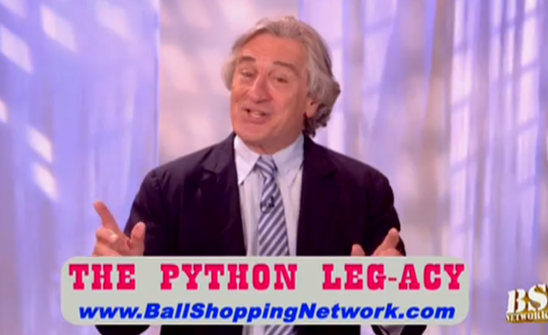 Did you know that Robert DeNiro was a big Monty Python fan? You can see a rare video that a Monty Python fan posted on YouTube in our home page video player. The video seems to be taken from the DVD of last year’s “Secret Policeman’s Ball” — a show that was performed at Radio City with a variety of all star musicians and comedians including Jon Stewart, Russell Brand, Ben Stiller, and Coldplay.

The DeNiro video was added later. It was conceived by Python expert and Amnesty producer Martin Lewis, who apparently convinced DeNiro, Whoopi Goldberg, Kyra Sedgwick and Annette O’Toole to participate in the video. It shows DeNiro as an infomercial barker hawking Python “legs.” It’s a reference to the original Secret Policeman’s Ball, which is on DVD already in the US and is quite amazing.

You don’t often see DeNiro like this–he’s a sport. The whole thing is for Amnesty International, which DeNiro supports. Also, some details that I’ve culled from the DVD release: the Pythons helped write the material, and Michael Palin and Terry Jones were involved.

More info coming. But for DeNiro fans, a little tidbit…and hope that it’s released soon in the US so we can see the whole thing…