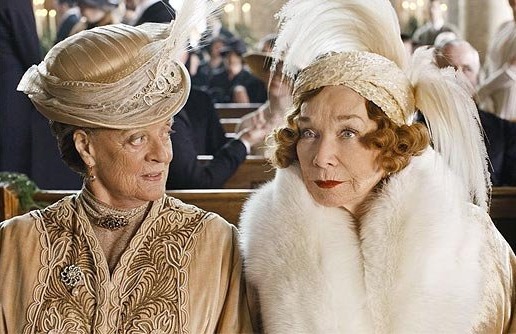 Well, if the last two hours on PBS weren’t its highest rated ever, I’d be surprised. The return of “Downton Abbey” with a two hour premiere (actually two one hour episodes back to back) was a total enjoyment. Just when the show was teetering on becoming a Monty Python sketch, in comes Shirley MacLaine to save the day.

As Martha Levinson, the mother of Cora, Lady Grantham (the great Elizabeth McGovern ), MacLaine was just right as an American on the verge of the roaring Twenties with no pretenses and lots of fun to cut through the rubbish. And MacLaine doesn’t ham it up as much as you might have expected, there’s no big duel between her and Maggie Smith. MacLaine is a smart, smart cookie. She knows she’s not going to win that fight. And this isn’t “Dynasty,” by god. MacLaine was a welcome breath of fresh air in a dusty house. And when Martha observes the age of houses like Downton is over, she’s right. Which makes what will happen in Season Three (and we kind of know where we’re going) mean that Season Four probably will be the end. That’s okay.

Anyway, Maggie Smith, the Michael Jordan of “Downton,” scored more points than any other player. I’m sorry, I’m the willing victim to all of her one liners. The best by far was saying she mistook her son, Robert (the ever patient Hugh Bonneville) for a waiter because he was wearing a regular black tie tuxedo to dinner. (They call it white tie.) Smith’s timing is so impeccable she could slice diamonds with it. And Bonneville — who may be the heart and soul of “Downton”— takes it like a man every time. One day we’ll see the outtake reels and wonder how they all soldiered on.

Mary and Matthew’s wedding was too romantic for words. Creator Julian Fellowes really struck lightning with Michelle Dockery and Dan Stevens. Dockery has literally become a professional yearner. She may be the first since the 1930s. Stevens is fine, and plays the Cary Grant role for all it’s worth. How he’ll fare post-Downton is anyone’s guess. (David Caruso, anyone?) But Mary will be okay, I really believe it. There’s something bigger for her in the world before “Downton” ends.