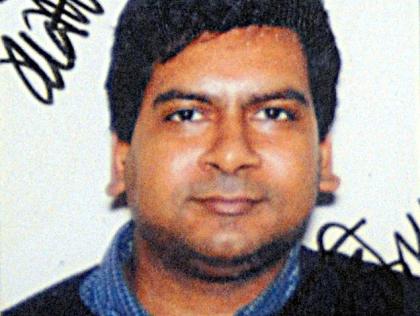 UPDATE 9:15PM SATURDAY NIGHT: I’ve just read Erika Menendez’s statement that she pushed Sunando on purpose, that she “hated Muslims.” She’s crazy, of course, but well enough to be convicted I hope of this hideous crime. This is heartbreaking, that her racism and “insanity” could have resulted in such a tragedy. Sunando truly is the most inncent victim of a hate crime.

Six years ago this past summer I had to remove half century old glass slides from their protective holders and digitize them. They were pictures taken in the 1950s, of my my grandparents’ anniversary, and my parents’ wedding, circa 1956. The slides were used for a 3D Stereograph which no longer worked. No one knew what to do with those slides, how to make them into prints. I called several film labs downtown. Only one person volunteered that he could give it a try. His name was Sunando Sen, and he worked at the NY Copy Center on East 11th St. and Fourth Avenue.

For two or three weeks in the summer of 2006 Sunando and I worked on this little project by phone, email and in person. What do I remember of him? He was patient, mainly. He worked painstakingly to get the pictures right– photos of my parents, then 24 and 22, cutting their wedding cake, my grandparents glowing, great aunts and uncles all the age I am now. My great grandfather is all smiles. He made a relatively complicated procedure easy, and he was happy to do it. There is now an album of photos we thought had been lost to time and technology thanks to Sunando. I never saw him again.

On Thursday night, two nights ago, I took my twin nieces, age 12, to see “Mummenshanz” downtown at NYU. We took the number 1 train back uptown around 10pm. The train stopped a couple of times and the conductor announced, ominously, “There is no number 7 train service due to police activity.” A couple of women, maybe a little tipsy, tourists, asked: “What does that mean?” I said, and my nieces remember it, “It has nothing whatsoever to do with us. Don’t worry.”

It wasn’t until Friday that I realized what had happened: the police activity was about Sunando, who’d been pushed to his death from an elevated train platform by a crazy woman. It was an act of random violence, committed against someone I had actually, briefly, known. You think of these things as remote atrocities–school shootings or theater killings in Colorado, for example. Then a whole class of small children and their teachers are killed in a Connecticut town not far from where I grew up. And a man who was once so helpful and nice to me has been killed. All for no reason.

Mayor Bloomberg says to keep Sunando’s death in perspective and remember how safe the subway is. That’s nice; Mayor Mike spends the weekends in Bermuda. Here in the real world, on the ground floor, it’s not quite so easy.  Bloomberg doesn’t have to meet actual New Yorkers. He can just read about them. For him, we are fictional characters.

Sunando Sen was a real person. I knew him the way a lot of New Yorkers know each other. We pass through each others’ lives. Sunando didn’t tell me anything about his personal life, but he was surprised that I had this family, that I knew who everyone was from before I was born. I remember telling him stories about each one. Now I know from reading about him, Sundando had no immediate family. He had roommates, and they cared about him. But I’ll never forget what good care he took of my family six summers ago. A gentle man, may be rest in peace. I’ll try to keep it in perspective.