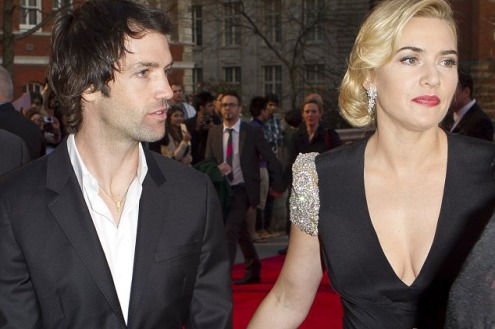 People–my friends, family, etc– often ask me, What are these celebrities really like? Are they crazy? And I say, no no, there are really great ones. One of the ones I really like is Kate Winslet. She’s tremendously talented and so level headed. She raises her kids in nearby Chelsea, and all the schoolkids’ friends come to all of her premieres and opening nights.

So now I can report that Winslet, who is 37 and an Oscar winner, has married for the third time. This ’round it’s someone named Ned Rocknroll, and he’s 34. That’s his legal name, although he was born Abel Smith, and he’s the nephew of billionaire adventurer Richard Branson.

According to People and other outlets, it was a secret ceremony that neither Winslet’s parents nor the groom’s knew about. Leonardo DiCaprio, twice her co-star in films, gave her away. In real life, Winslet has two children, one by ex husband Sam Mendes, director of “American Beauty” and “Skyfall.” Those children will have such great material with which to write memoirs. I hope they are taking notes.

You can look at this a couple of ways. It sounds nuts, right? But she married into a really rich family. Also, if you’re famous and beautiful and have an Oscar, you might as well live it up, right? Elizabeth Taylor didn’t stick around Chelsea going to PTA meetings in her thirties. Life is for living.

For more info on Mr. Rocknroll, here’s a great interview with his previous wife, whom he married in 2009 when she was 21.

Why did Mr. Smith change his name? Said his ex: “It was hysterical. We had discussed him doing this many times before, but I wasn’t sure whether he’d do it. The whole thing was about having fun with your name. He thought we all took ourselves too seriously so it was about reacting against it. He looked into just being ‘Ned’, with no surname at all but, apparently, that’s illegal so we couldn’t do it.”

Ned also worked for his uncle briefly as head of head of ‘astronaut relations and marketing.’ Said the ex: “He made that title up himself and it’s on his business cards…The job didn’t impress me. But his passion was incredible, and it really drew me to him. ‘He would say to me, there is no destination. The destination is now, now, now. The journey is the destination. We’re not trying to get somewhere. And that’s a really valuable lesson.’”