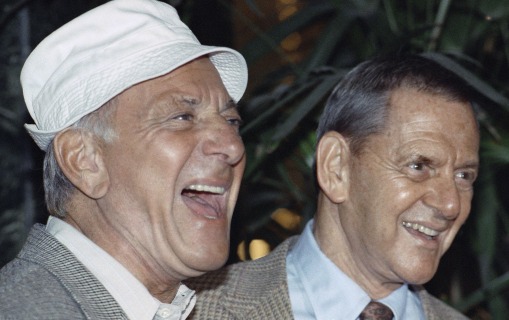 Jack Klugman died on Monday at age 90. It’s hard to believe he was 90 considering how he’s lived on an on as a 50 year old shlubby sportswriter in reruns of “The Odd Couple.” But I saw Jack and spoke to him this summer at Nora Ephron’s memorial service; he was in a wheelchair. Jack Klugman was a great actor but he was also a warrior. He kept defeating cancer over and over.

Even after his voice was crippled by cancer he continued to act, and to show up for his pal and “Odd Couple” co-star Tony Randall. Tony had a vision of an American version of the UK’s National Theater. When he needed stars to come lend their fame or names, they came. Jack Klugman was no exception. “The Odd Couple” only ran from 1970 to 1975 but well into the 1990s the two remained close friends. Klugman pitched in wherever he could.

When Tony died in 2004, Klugman said of him at his memorial service: “You could go to an art museum with him and come out after two hours with more information than you could believe. Then you’d get in a cab with him and he’d tell you the best dirty joke you ever heard.” They really enjoyed each other.

Klugman was Oscar Madison and he was also “Quincy,” the medical examiner in a long running series (1976-83.) But Jack Klugman — who had a long list of TV credits–should be remembered for a few other things as well. He co-starred with Ethel Merman in the original production of “Gypsy” on Broadway. He played Ali McGraw’s long suffering father in the lost classic film version of Philip Roth’s “Goodbye Columbus.” And he was Juror #5 in Sidney Lumet’s 1957 classic, “12 Angry Men.”

Klugman was married to actress Brett Somers until she died, although they were separated for a long time. She predeceased him. But Brett Somers was a character to anyone watching TV in the 1970s. She was a regular on game shows and played Oscar’s ex wife on the “Odd Couple.” And now an era closes as they all are gone. These were fun, cool people, at least from outside looking in, and they will be sorely missed.