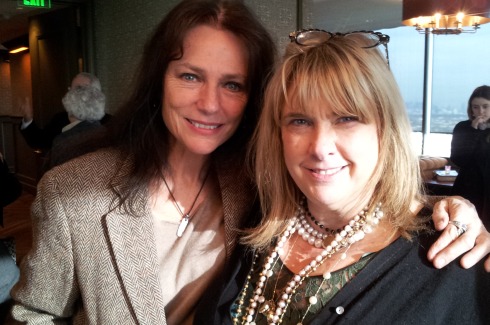 Every so often I have to zip out to the West Coast to my least favorite place in the world. I actually lived in Los Angeles for a year, many moons ago. It was a nightmare. The people there do not know how to drive, or how to get to the places they want to go in an efficient manner. The populace cannot sustain much theater, which is a shock to a New Yorker. On Saturday night I saw the excellent national touring company of “Anything Goes” at the Ahmanson Theater. There were empty seats all around us! On a Saturday night ! Good lord. And they’ve got an all star cast including Jeannie Berlin in “Other Desert Cities” around the corner. It’s about their own people! Jeesh.

Anyway I digress. Going to Los Angeles now is like being in a dream. I see people there who I only see on these visits. My family and friends in the real world, New York, don’t even know I know these people. But it’s always a pleasure to hang out with Robert Forster, one of the great veteran actors in Hollywood. After a pretty successful career in the 60s and 70s, Bob was rediscovered by Quentin Tarantino for 1997’s “Jackie Brown.” He is one of the great guys. Last year he was in Alexander Payne’s “The Descendants.” He just shot an indie film here in New York. It’s just great to see him on screen.

I am in love with Jacqueline Bisset. Who isn’t? She is beautiful and smart, a class act. She is one of Hollywood’s treasures. Jackie has never capitulated to Hollywood– no facelifts or scandals. She’s been played Sasha Alexander’s mother on “Rizzoli and Isles”– another favorite of mine, Lorraine Bracco, has been playing the other mom. (Were moms always this hot?) Jackie’s set for a biopic of “Vivaldi,” but I’m waiting for some clever young director to realize Bisset is a still vital player and cast her in something unique and befitting the great star of “Bullitt” and “Under the Volcano” as well as “Airport,” “Rich and Famous,” and of course “The Deep.” She’s quite brilliant.

Who else do I see this time of year, during Oscar season? The effervescent Colleen Camp (who just threw a cool party for “Silver Linings Playbook”), the great and always plotting something sensational Sally Kirkland, Robert Morse who can’t say a word about “Mad Men,” and so on. Plus over this past weekend I ran into Carrie Fisher, Rosanna Arquette, and even the great cinematographer Haskell Wexler. Too many talented people in Tinseltown, all with great stories!