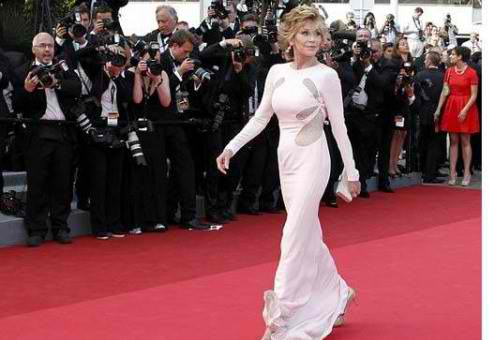 December 21st: I do believe the world is supposed to end today. Also, it’s the winter solstice. And Jane Fonda, the two time winner of the Academy Award, the great American actress after Katharine Hepburn and before Meryl Streep (and who gave us Meryl Streep in “Julia”), mother, grandmother, sister, activist, speaker of her mind, visionary, writer, and friend turns 75 years younger today. God bless her.

There have been books written about her, and she’s given us a full length memoir. Years and years ago, DA Pennebaker shot an entire documentary about her. For the smart people, she’s a hero–Jane Fonda gave voice to a generation when she was just finding her own, and enabled us to ask important questions of our government when it wasn’t fashionable, when it was dangerous, and when she had everything to lose after winning an Oscar for “Klute.”

After all she was also the daughter of a beloved movie star; she was Hollywood royalty. But she’d repositioned herself from sex kitten to thoughtful advocate. And she completely represented how the Sixties of pillbox hats and the Twist became the early Seventies of protests and ultimatums.

If your head remains buried in the sand, she’s still Hanoi Jane sitting on that tank. Please. She’s apologized over and over. The internet is still full of fictional tales about so called treasonous acts– all made up, well documented fantasies. Mistakes were made, yes, she’s the first to admit them. But we have to appreciate it when someone who has a lot to lose leverages their world to make a difference in ours. Fewer people do that every day.

Her GCAPP (Georgia Campaign for Adolescent Pregnancy Prevention) foundation in Atlanta has helped thousands of teenage girls. Her work out books, tapes, and DVDs have always been cutting edge primers for mental and physical health.

None of this is accomplished without amazing focus, tenacity, and sheer brilliance. And it hasn’t been easy: her mother committed suicide. Her father was distant and difficult. She could have coasted, and taken life easy. She committed herseld instead to having the fullest life, mistakes and all, lived out in the open, come hell or high water.

It’s not over by a long shot. Seventy five? Jane Fonda does not retire. She’s got movies, and plays, and projects. She’s just been around the world promoting more workout DVDs. When she goes to the Cannes Film Festival–as she did in 2011–she steals the show from all the ingenues. Hot, sexy and smart at 75, that’s Jane Fonda, without hesitation.

The Oscars were for “Klute” and “Coming Home.” But in the 70s Jane took control of her career. Now every actress has a production company. Then, only Jane Fonda did. “Julia,” “The China Syndrome,” “On Golden Pond,” “9 to 5,” not to forget “The Morning After,” “The Electric Horseman,” “Comes a Horseman”– what a run. Even when  film didn’t quite work, like “Stanley and Iris” with Robert DeNiro, you could see the intentions were good.

The quintessential Jane Fonda film shows the main character on a learning curve. She starts with an established idea, or ethic, that is perfectly reasonable. Lots of people could live like the characters as we first meet them. But then everything is quesitoned, slowly, like an onion being peeled. And Fonda’s heroines learn something new. And we learn with them– even if it’s funny, as with “9 to 5” when Judy Bernly gradually realizes what her life could be.

Jane saw a long time ago what her life could be. I think she’s basically an optimist, which is sort of amazing. How does a person become that after everything that’s happened to her? Yesterday she wrote on her blog:

“When I was young–up till my 50s–I was sure that if I lived this long I’d be miserable, decrepit, ugly and alone.

Instead, I’m happier than ever, more at peace, healthy–well, there are times when my body hurts all because I have osteoarthritis. But that doesn’t define me. I’m basically healthy and have loving, intelligent, challenging children, grandchildren, friends and lover. I feel very blessed. I also know that this didn’t just happen, I’ve worked hard (and continue to) for this to be so.

I will turn 75 tomorrow, Friday 12/21/12, the day that the Mayans and others predicted a many-thousands-of-years-old era would come to an end. There are those who interpret this prediction as End of Days. I feel—as do many others–that it will, instead, mark an awakening, a new beginning.”

Really, no kidding, words to live by.