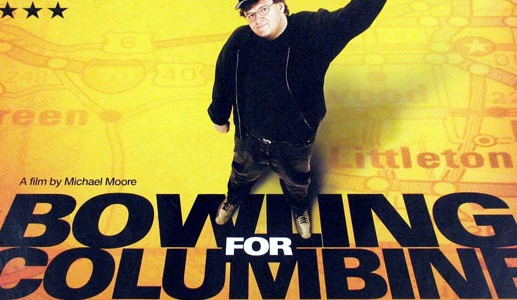 “Bowling for Columbine,” the anti-gun documentary that put Michael Moore on the map for good, has been posted all over the internet for free. Moore has placed it on YouTube, with NetFlix and on Current TV’s website for free so anyone can see it. In light of the Newtown, Connecticut tragedy. “Bowling for Columbine” comes off as more prescient and genius like than ever before.

The film can be seen in its entirety in our video player at the bottom of our home page. Also, here’s the YouTube link: http://www.youtube.com/watch?feature=player_embedded&v=fAouWXzi-1Q

“Bowling for Columbine” won the Academy Award, the Broadcast Critics Award, the 55th anniversary prize at the Cannes Film Festival, and ever other award except the Golden Globe in 2002-2003.

Also, if you’re in Traverse City, Michigan on Thursday. Moore and wife Kathleen Glynn are screening “Bowling for Columbine” for free at 6:30pm at the State Theater.

“I am truly beside myself this time. I tried to ring a warning bell about this a decade ago. The disease has only gotten worse.

But…you feel something different in the air across America tonight, don’t you? People have had it and the outrage is loud and visible. I’m convinced the majority of Americans will now back strong gun control laws. And a better mental health care system. And perhaps a few are willing to look at the deeper issue of how this country officially sanctions violence as a means to an end.

The NRA, for the first time ever, has gone silent. They’ve taken their Facebook page down. They know they can’t show up in Newtown next week and stick it to the people there, like they usually do after one of these mass killings. Let’s face it, the gun lobby tonight is on the ropes. Now is the time to act. We can’t let this sad moment pass without a true response and a president willing to be a strong leader.

I’ll send some more thoughts tomorrow, but for now I thought I’d share with you what I’ve been sending out over Twitter this weekend. (If you’re not on Twitter, please consider it. I know – not one more social media stop, please! But I’ve found it to be a quick and easy way to communicate with millions. Please give it a try. I send things out on it every day and I’d like you not to miss them.)”