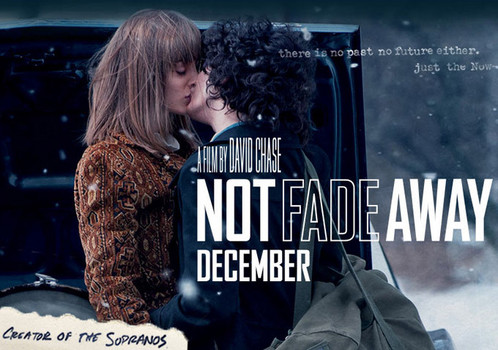 David Chase is basking in the glow right now of his first ever feature film, “Not Fade Away.” The coming of age story about a young New Jersey musician in the 1960s is his labor love. If you dig music from the British Invasion, from the Beatles to the Rolling Stones (Paramount really ponied up for the soundtrack) then “Not Fade Away” is going to reel you in.

But I asked Chase last night about his future plans at the “Not Fade Away” after party at Brasserie 8 1/2. What about a “Sopranos” movie, I asked. “No, unh uh,” he said, shaking his head, and his wife even agreed. I did try to slip in–‘those people are dead’–but Chase refuses to say what happened to Tony, Carmella, Meadow and AJ.

He did tell me that there’s been talk at HBO of a “Sopranos” prequel. “It would be with Tony’s father, and Uncle Junior, and Livia–Tony’s mother long before any of the other characters we know now.” Great idea. But Chase has some other ideas. He has a series in mind with HBO about the silent film era. He also would like to make a psychological thriller. At 67, Chase is a newcomer to films, but a welcome one.

The “Not Fade Away” premiere boasted at least one former Soprano–“Paulie Walnuts” aka Tony Sirico, who just came as a guest. But James Gandolfini who stars in the film was there, too, along with the very gifted Molly Price, who plays Gandolfini’s hilarious wife and the mother of an aspiring rock star. Bobby Cannavale stopped by after getting off work on Broadway in “Glengarry Glen Ross.” And I was thrilled to see the beautiful as ever Annabella Sciorra.  She and Cannavale may reprise their roles in “The Mother-f- with the Hat’ in Los Angeles this winter, she told me.

Meantime, “Not Fade Away” boasts a talented young cast who will get launched from here including John Magaro, Bella Heathcote, Dominique McElligot, Meg Guzulescu, and the always stunning Jack Huston–nephew of Anjelica, but quite a success already and expecting his first child in three months. Another Huston for the Hollywood dynasty!

And the “Not Fade Away” music: soundtrack meticulously curated by Steve van Zandt, who included the Rascals, ‘natch. Steve is producing the Rascals don’t miss reunion shows this weekend in Port Chester, New York at the Capitol Theater. http://www.showbiz411.com/2012/12/14/the-rascals-reunite-triumphantly-after-40-years-of-feuding