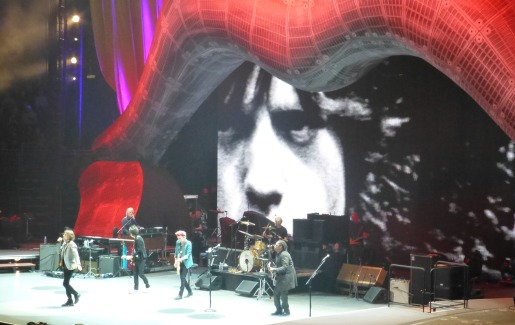 There was no sympathy for the devil tonight at the Prudential Center Arena in Newark. Mick Jagger started off the Rolling Stones “final” show of their 50th anniversary tour–the 5th show–by sending condolences to the families in Connecticut who lost loved ones on Friday. We are all connected you know: Keith Richards lives half an hour away from the tragedy.

Around 12:30am, the Stones started an after party at the Hotel Carlyle on Manhattan’s Upper East Side, celebrating the end of the tour. I have to say, if they can stay awake, they deserved a great party in an elegant hotel a la 1978. They played the Prudential like it was 1978 and they were promoting “Some Girls.” With a ferocious intensity, the Stones laid down this last set that was simply historic. Mick Jagger danced and levitated, Keith Richards and Ronnie Wood made fire with guitar stings, 72 year old Charlie Watts pounded his drums like a 21 year old punk rocker just back from lifting weights. And Mick Taylor, rejoining the band after many years, was superb on “Midnight Rambler.” People in the audience who didn’t know his work were on their feet, clapping.

And the people in the audience did feature celebrities: Whoopi Goldberg, Sarah Jessica Parker, Elvis Costello and Diana Krall, Christy Turlington and Ed Burns were visible in floor seats. But in our section, to the side and much lower than last Saturday, I spotted director Martin Scorsese with daughter Francesca and some school friends; and rocker-model-writer Bebe Buell, also mother of actress Liv Tyler. Buell just returned from Nashville where she caught Aerosmith’s last show on this tour, then made the Stones finale. All in three days!

I would have tried to file from the Pru or even Tweet from it, but unlike the Barclays Center in Brooklyn there is no open WiFi. There’s also no TMobile signal. So I was stuck being old school–and just enjoying the amazing concert. To say Jagger moved like Jagger is an understatement. He was on hyper drive. He didn’t dance so much as he hydroplaned. His feet often did not touch the ground. His singing was sinister on “Paint it Black,” “Gimme Shelter” with a soul shouting Lady Gaga. There were a few guests; Jagger joked he felt like it was a talk show. But Gaga was a smash. The Black Keys were capable if not quite indelible. But Bruce Springsteen was a fun addition on “Tumbling Dice.” He was grinning from ear to ear as he played and sang on one of the Stones’ classic hits.

I don’t really know how they did it. The show runs from sloppy to tight. You can’t say the Stones are over-rehearsed play from rote. They try things spontaneously. Some work, some don’t. They laughed when they failed. But most of it was glorious. “You Can’t Always Get What You Want,” with a huge choir, was a masterpiece. “Honky Tonk Woman” — as they say now, they left nothing behind. Or nothing on the floor. An online content added “Send Me Dead Flowers,” which gave the show a country feel and Jagger a chance to show off his twang.

Richards got an overwhelming ovation when it was time for him to sing “Before They Make Me Run” and “Happy.” He actually teared up, water welling in his eyes. And then he was perfection.

Will they be back? Undoubtedly. But not here. Los Angeles maybe. Las Vegas. Chicago. Dallas. Paris. But this may have been it for New York. This may be the last time, as Jagger sang tonight. I don’t know. But to mark 50 years, it was an extraordinary end.