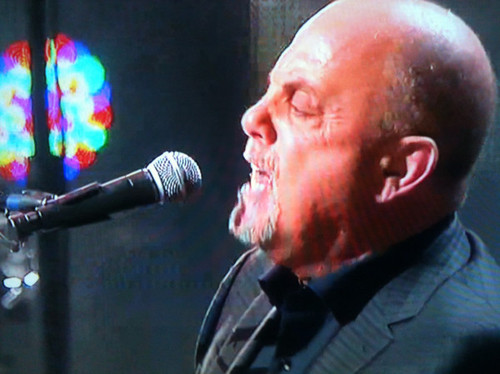 By the time Billy Joel came on at the 12-12-12 show I’m not sure what day it was, or if the Oscars had come and gone. Sometimes ‘more is more’. Around the time the Rolling Stones played “Doom and Gloom” instead of a classic hit, the mind had wandered. Bruce Springsteen, Roger Waters with Eddie Vedder and the Dark Side of the Moon, a vibrant Jon Bon Jovi AND Springsteen made up for all of it. A few actors had come and gone.

But then there was a kind of wasteland– The remaining Who, and who knows what else. Kanye West did “GoldDigga” with Jamie Foxx, a rip off–er a tribute to–Ray Charles, and something indecipherable while looking sort of nuts. Kanye and Alicia Keys were the only featured black performers. Aretha Franklin, Stevie Wonder, Earth Wind and Fire, and Smokey Robinson may have all been in bed.

Oh yes: Leonard Cohen’s lawyers, I hope, are preparing a massive lawsuit against Adam Sandler for desecrating “Hallelujah.” WTF, as they say?

But then: Billy Joel. From Long Island. Yes, he looks old. Naturally aged, not bone jangling British thin. He looks like he’s from Long Island. And he is a relief. Playing, singing, melodies, classic songs, lots of LIFE. As a lifelong part-time Long Islander, I cheered. My only gripe with Billy Joel is no new music in 20 years. But his catalog is simply a delight. No Auto Tune (hello Kanye). No artifice on the keyboards (Alicia!). You can sing the songs with him (no Doom and Gloom for him). Thank you Billy.

“We’re going to be alright. We’re going to get through this,” Billy says. Okay. I will donate money now to the Red Cross or Salvation Army in his honor.

So we wait for Paul McCartney: keep refreshing. And drinking coffee. The Golden Globe announcements are at 8:30am, which may be minutes after this show ends.