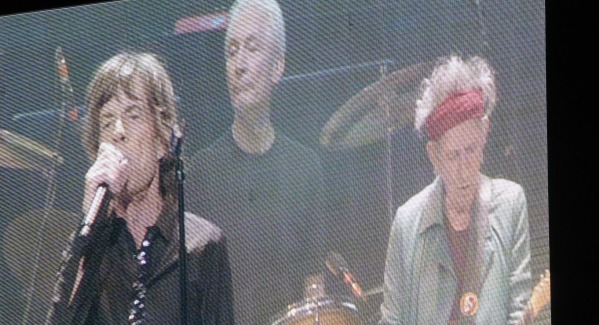 The Rolling Stones hit New York tonight– well, Brooklyn, at the Barclays Center. The place wass jammed with celebs like Martin Scorsese, Katie Couric, Brian Williams, Jimmy Fallon, Mica Ertegun (widow of Ahmet, who signed the Stones in 1971 away from London Records), Her Highness Anna Wintour, and Larry King on the A list. Bette Midler and her husband wandered in just before the show began. It’s unclear whether expected guests like Colin Powell and Matt Lauer ever made it.

Mary J Blige and Gary Clark Jr. did guest spots. Mick Jagger joked about the high price of tickets. He also seemed confused about the set list. But the band is tight. Jagger is a 69 year old wonder of the world. Songs so far include Get off My Cloud, Miss You, Gimme Shelter. The show started with dozens of drummers marching through the crowd on the floor, which is very far away.

It was not a perfect show. The acoustics were shrill for those who paid 500 clams and sat high and to the side. It was almost a blessing when shrill became fuzzy and the sound was more like an old 45 than a digital rendering. 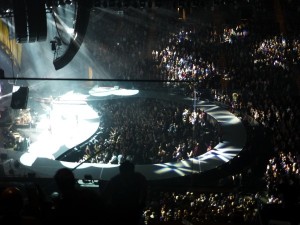 But the band plays on with chunky rhythms only old time blues students would know how to handle. This gang can make a song stand at attention in their sleep. From “Start Me Up” to “Midnight Rambler” to “Gimme Shelter” with Mary J, the Stones never give up. You can joke about their total ages, or whatever, but I dare you to find a band of a quarter their age who can reach so effortlessly to the top rows of a stadium. 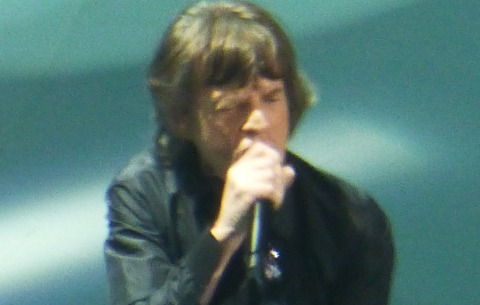 Granted, it was almost cruel watching people my age or older struggle to the upper reaches of the Barclay Center clutching those $500 tickets. It was perhaps even crueler to learn that just one row behind us people paid only $285 a seat. (Only: hah!)

The Stones always liked to present themselves as the ‘band of the people.’ But Jagger joked about taking the subway to Brooklyn. He said the first show he could remember playing in New York was Carnegie Hall in 1964, when the subway was a quarter, a hamburger was 50 cents and “the price of a Rolling Stones ticket was—” He cut himself off.

Still, if you can pare away the insult of the ticket prices, they are indeed not only the Greatest Rock and Roll Band, but maybe the last. “Tumbling Dice,” “Brown Sugar,” “Wild Horses,” were all gems. Keith got to do “Happy” and “Before They Make Me Run,” proving that his licks are still tasty and that time is on his side.

There were pretty much no ballads– no “Angie” or “Ruby Tuesday.” And aside from the two new songs, “Doom and Gloom” and “One More Shot,” there was nothing from the Stones post-1981 souvenir recordings. Jagger knows that the stuff pales beside the classics, so why bother when you’ve got so much more to do? Some oldies but goodies included the Beatles’  “I Wanna Be Your Man” and “The Last Time.” I hope there are even more “Hot Rocks” in Newark next week.

And PS you can look at a set list and say, oh yes, this one, then that one, and so on. But hearing them in full, one after another, remains a kick. From “Sympathy for the Devil” to “Street Fighting Man,” these are the cornerstones of rock history. And they remain as alive as ever.