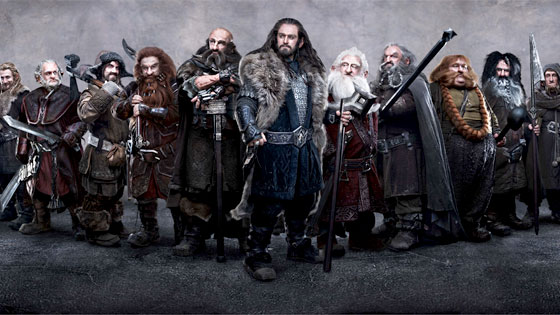 Peter Jackson‘s take on “The Hobbit,” his fourth Tolkien movie, got an A list premiere last night at the Ziegfeld with all the trimming, plus a swanky no holds barred party at Gustavino’s. The guests included Ben Affleck, whose own Warner Bros. movie “Argo” is about to get full on Oscar treatment (and maybe Golden Globes, too) plus Liv Tyler, who’s still in the Tolkien circle after three Jackson “Lord of the Rings” movies.

The star of “The Hobbit” is Martin Freeman as Bilbo Baggins. But let’s face it: the audience wants to see Andy Serkis, who lights up the screen once again as Gollum, sort of your best old evil friend. “The Hobbit” is long and filmed in a kind of wonky 3D that I wouldn’t recommend necessarily for parts 2 and 3 of “The Hobbit’ unless someone can figure out the lighting problems. The movie often looks too bright and a little cheesy. It’s missing the grand richness of the “LOTR” movies.

But “The Hobbit” is a showcase for special effects and CGI, like the big finale featuring flocks of gigantic broadwinged eagle-types who save the day in Middle Earth. A lot of “The Hobbit” is breathtaking, and some if it is just exhausting. I think you go through at least 90 minutes before Gollum appears. Freeman has been a capable guide until then. Ian McKellen returns as Gandalf and appears in most of the movie–ironic since it took so long for the producers to make a deal with him. And plenty of familiar faces from “LOTR” appear– Elijah Wood, Hugo Weaving, Cate Blanchett, Christopher Lee.

Next time, Mr. Jackson, bring back Liv Tyler and Viggo Mortensen. Why not at this point?

(I know Tolkien purists are freaking out that a lot of this “Hobbit” includes bits of other things, but that’s a an acceptable license in order to make a movie for the audience. If you want genuine “Hobbit, read the book.)

Still it’s Serkis who nails the movie down. When Gollum and Bilbo finally interact in their “riddle” scene, “The Hobbit” is at last alive. They’re still fighting over that damn gold ring. And while the trade reviewers suggested that “The Hobbit” is overlong, and padded to make three movies, no one will care. Trust me. People have been flocking to Wagner’s 20 hour “Ring” cycle for 100 years over and over, all over the world. They’re coming to “The Hobbit” 1, 2, and 3. Just try and stop them.

But please, producers– no more fancy 48 frames per second. You don’t need it, and it’s distracting. It also shows off flaws in the filming because it’s just too accurate. Peter Jackson is so good at telling these stories–just tell ’em.