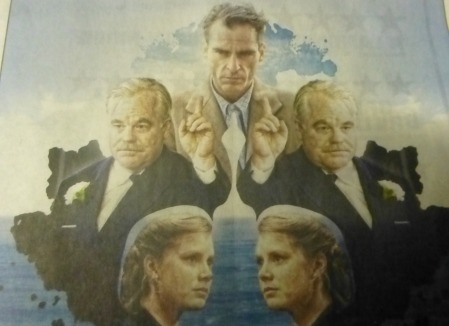 I almost thought that there was no Oscar campaign for Paul Thomas Anderson’s “The Master.” But today arrived a parody of a Scientology mailing promoting the film, which should be a Best Picture nominee and have three actor nominations as well. The Weinstein Company sent out a folded magazine on newsprint called “The Cause Footpath.” The Cause, of course, is the cult religion started by Lancaster Dodd, played by Philip Seymour Hoffman in a performance as good as Daniel Day Lewis’s Lincoln or Denzel Washington’s addicted pilot.

The Footpath is a fictional publication from Dodd– “The Weekly Newspaper for the Enlightened.” It mimics the annoying periodicals published by Scientology or Jehovah’s Witnesses “The Watchtower.” Very clever. Hoffman, Joaquin Phoenix and Amy Adams are shown on the cover. I’ve reproduced it twice here.

Inside TWC includes mostly the sterling reviews for the movie. The backpage is a long quote from Dodd, from Anderson’s original screenplay. There’s also a very witty fake 1949 article about Dodd and his wife Peggy (Amy Adams, Best Supporting Actress nominee without a doubt). 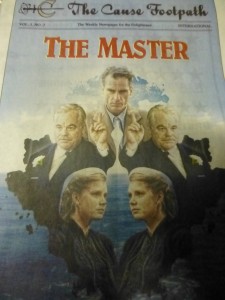 I’m very torn about putting Hoffman into Supporting Actor. He is as much the lead as Phoenix. Lancaster Dodd is one of the greatest character inventions in modern movie history. I do think PSH is an absolute genius, in the league of Daniel Day Lewis and maybe just a couple other actors of this generation. (Don Cheadle and Ralph Fiennes are close.)

If you’re voting with any groups this month, don’t forget “The Master.” And I do believe “The Cause Footpath” will become a collector’s item overnight!