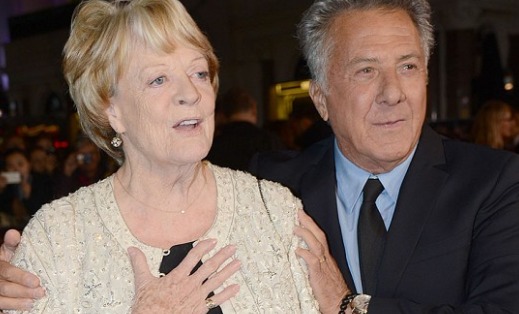 by PAULA SCHWARTZ, Special to Showbiz411— Dustin Hoffman has made his directing debut with “Quartet,” a beautiful and funny movie about formerly famous and distinguished musicians – Tom Courtenay, Pauline Collins, Billy Connolly, Maggie Smith, Michael Gambon head the cast  – who live out their old age in a British nursing home for old stage-folk.

The movie’s adapted by Ronald Harwood from his 1999 play. It would be a crime if it’s overlooked in the crowded awards season. Extremely well made, witty, beautifully filmed, “Quartet” features awards worthy performances from Maggie Smith and Billy Connolly, at least. It’s a little like “Best Exotic Marigold Hotel” but with classical music and set on a sumptuous English estate.

The revelation is that a film about old age can be so funny.  “I guess it’s the only real defense you have against mortality,” Hoffman explained.

Getting older has been very good to the 75 year-old actor, who looks great and  has a full head of foxy grey hair.  He introduced me to his wife of 32 years, Lisa, who stood next to him.

“It was a combination. It’s like people that wait a long time to get married and they say, ‘Why’d you wait so long?’ You say, ‘Well, there were other people’ but somehow I met this one person that I liked at the same time and I felt maybe it’s time to settle down. So I did respond to material but also I felt, now or never, cause I’ve been wanting to direct for so long.”

Surprisingly Hoffman told me his first love was directing. “I used to take acting class. I would coach and direct my fellow class mates, who were doing scenes and they said, ‘You should be a director.’ You’ll be a Kazan.”

“The Graduate” actor told me he had some reservations. “I thought if I go into directing that means I’ve given up on acting. I admitted that I’m a failure, cause I waited tables for about 10, 12 years to get acting jobs.”

Then Hoffman went back my original question. “Why did I wait so long?”

“You were busy,” his wife suggested.

I repeated a line from the film. “Great performers need great directors.” Is it true?

I asked if the actors improvised, especially Connolly, a stand-up comic (he’s at the Beacon Theater Thursday and Friday) who’s got some very funny stuff in the film about lessening of inhibitions, senility, sex.  “I let all the actors have free range in the sense that I do in the films that I’m in,” “The Tootsie” actor said. “You have a framework and if the actor feels like moving within that framework then go. You don’t hold them down.”

Is the idea of the movie to also make people feel better about aging? “The idea is we kind of have it upside down as a culture,” he said. “God knows it’s transatlantic and that is at a certain point people are afraid to look at what they’re going to become, for whatever reasons, and people who are wonderfully gifted, no one’s ringing their phone. Ronnie Hughes, who plays the jazz trumpet, is 82 years old. He hasn’t lost any ounce of his chops but no one called him for years before I did. And that’s a kind of interesting question of why?”

So what’s his next movie? “I don’t have one,” the legendary actor said. “I finished this movie in March and then I went into the cutting room, and I said to my agent,” that “I need a fall movie. I’ve been doing this for three years and he said, ‘This is your fall movie,’ meaning I have to go around and try to expose it to the people, because Maggie’s busy and there wasn’t anybody else. This is harder than anything I’ve ever done. You go from one film festival to another, all over the world,” he sighed.

Connolly, whose own mane of grey hair is nearly to his shoulders, told me Hoffman originally had Albert Finney in mind for his role but Finney got sick, so when Hoffman asked him to be in the film he “was more than delighted,” adding he thought Hoffman “was a great director.” As for whether Hoffman wanted him to improvise, the comic said, “he encouraged it. I’m a free bird. I just do whatever comes into my mind.”