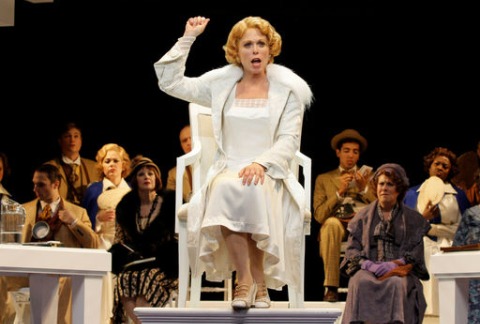 UPDATE: “Scandalous” will close on Sunday after all. Kathie Lee Gifford made a good effort, but the show was not good, and the audiences just weren’t there. See more below.

From Tuesday morning: The really not very good musical “Chaplin” has finally put up a closing notice for January 6th. How they made it this far is a mystery. “Scandalous” can’t be far behind. The Kathie Lee Gifford musical played at 37.6% capacity last week, taking in just over $370,000. Granted, the box office was up from prior weeks, but not remotely enough to keep going without tremendous problems.

I told you about the whole financial backing of “Scandalous” a couple of weeks ago: http://www.showbiz411.com/2012/11/20/scandalous-musical-backed-by-amway-family-and-christian-right-barely-holding-on. Then the New York Times, perhaps in an homage to this column, did the same thing. “Scandalous” is backed by money from the billionaire family that owns Christian right wing-pitched pyramid direct sales company Amway. Its other backer is the Foursquare Church founded by the musical’s subject, Aimee Semple McPherson.

There does seem to be a limited audience for “Scandalous,” which might have been better off pared down and playing in an off Broadway theater. At this rate een Amway reps won’t be able to keep it alive on the Great White Way. Expect a closing notice right after Christmas. A good try by Kathie Lee in the long run. And the Amway family, called Devos, won’t even miss the money. If only they’d included Milton Berle as a character. Now that would have been scandalous!