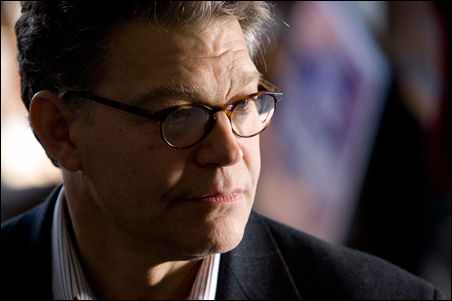 Senator Al Franken was the big surprise presenter last night at the Governor’s Ball for the honorary Oscars. Franken flew in from Washington to present famed documentary filmmaker DA Pennebaker with his lifetime achievement award. Pennebaker produced a film about Franken’s run for the US Senate, called “And God Spoke,” which was directed by Pennebaker’s filmmaker wife Chris Hegedus and Nick Doob.

Franken skipped the red carpet and did no press so that Pennebaker wouldn’t know he’d come in. He introduced a montage of clips from the 60 year Pennebaker career including The War Room, Don’t Look Back, Monterey Pop, Kings of Pastry, Crisis, Primary, Town Hall, Only the Strong Survive, and Company.

It was Michael Moore who did the actual presenting to Pennebaker. Moore fought for Pennebaker for two years, I’m told, as a governor of the Academy. Moore and his wife Kathleen were prominent at the Pennebaker table, and Moore delivered a beautiful speech delineating how Pennebaker came to influence not just documentaries but all of film with his creation of cinema verite– along with pals Al Maysles, Richard Leacock, and Bob Drew.

Pennebaker, who’s 87 and very active still making movies with Hegedus, told a lot of great stories about Bob Dylan especially and how they invented what has now become the famous “throwing cards’ scene that accompanies “Subterranean Homesick Blues” in Don’t Look Back. He also explained one of his many inventions–the handheld camera that could be hoisted on a camera man’s shoulder so Pennebaker could be a fly on the wall in the Kennedy White House during the Cuban missile crisis.

Moore, by the way, has not stopped making films himself. But after an exhausting run with Bowling for Columbine, Farenheit 911, and Sicko, he’s taking a well deserved break. He will be back. And we need him more than ever!