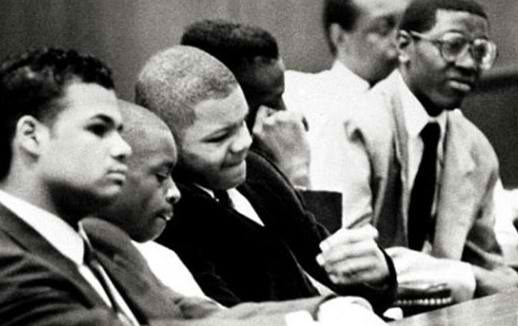 by LEAH SYDNEY for Showbiz411— “The Central Park Five” tells the story of the infamous Central Park jogger rape case in New York City on April 19, 1989.   The then unnamed jogger, a 28 year old investment banker, was viciously raped and left for dead just yards from the jogging loop around the Central Park reservoir.  The New York media dubbed it ‘the crime of the century,’ and the word ‘wilding’ came into the lexicon. This resulted in five young males– some were only fourteen–who were also black and Latino– being arrested in a modern day witch hunt and spending years in prison for a crime they didn’t commit.

Sarah Burns, the daughter of famed filmmaker Ken Burns, wrote a best-selling book on the Central Park Five. Now she’s written, produced and directed the film along with her husband David McMahon and Ken Burns.  This film will infuriate you by the blatant arrogance of power and hubris shown by the NYPD, the district attorneys at the time including Linda Fairstein, the media’s under-reporting and disregard for the truth, and the horrific racism that weaves through this case and pollutes everyone and everything in its path. Adding to the nightmare are the actions of then Mayor Ed Koch and Governor Mario Cuomo.

The Central Park Five, on an Oscar qualifying run,  grips and infuriates you from the beginning. The five suspects– now grown men tell their stories and struggles– and they are truly heartbreaking. Told in a no-nonsense, straightforward way, the film is spellbinding in its narrative of an outrageous blatant miscarriage of justice.  This incident is a true dark stain in New York’s storied history.  Sadly for the men and for the city’s character, the civil suit brought by the Central Park Five against the city in 2003 is still unresolved.

PS On a similar note: “The Exonerated” ends it run at the Culture Project, 45 Bleecker Street, this Sunday. The final performance should be quite emotional, with many of the original, wrongfully convicted prisoners in attendance. Trudie Styler is coming back to reprise her role, as well, for just the last performance. Not to be missed.