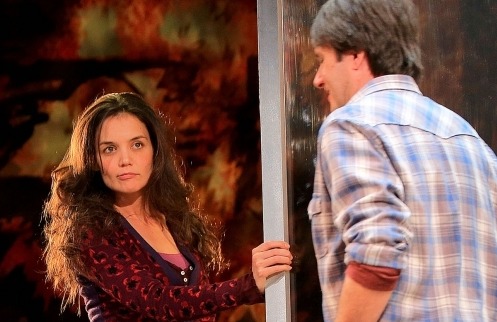 Freedom from her past constraints means Katie Holmes gets to kiss a guy for real on stage in “Dead Accounts.” The guy she kisses is Josh Hamilton, and you can tell she has a good time doing it. “Dead Accounts,” by Theresa Rebeck, opens tonight on Broadway. It’s thin material, and probably should have been off Broadway or presented without an intermission. It’s really just an acting exercise for a strong cast that includes Norbert Leo Butz, Judy Greer, Holmes, Hamilton, and Jayne Houdyshell.

Even with director Jack O’Brien there’s not a lot to be made here unless you’re from Cincinnati and have a hankering for that city’s ice cream. Otherwise there’s one idea and very little plot: Butz has returned home from New York where somehow he’s managed to embezzle $27 million from his investment firm. He’s taken it from “dead accounts.” That’s it, not much more, Katie plays his sister, and Hamilton is his best friend. Greer is Butz’s uptight New York wife who wants a cut of the money. Houdyshell is the mid-western mother who believes in god and prays a lot. Unseen is a father who is passing a kidney stone, then is said to be dying. (I have kidney stones, and this is not the case. They should have called me.)

All eyes are on Katie, who is just fine. I think she’s very brave for wanting to jump into theater for the second time. (The first was a revival a few years ago of Arthur Miller’s “All My Sons.”) Katie is obviously a name draw even though she’s not a seasoned stage actress. She would do well to try some off Broadway material, some classical theater, some rep companies. She rises to the occasion of the material, which is better for her in the second act. She’s very lively, projects well, gets good laughs in the right spots, and has the kiss. Bravo to her.

In our audience last night: Tim Daly with his sister who is not Tyne Daly but the other one (she was very nice), and comedian Jim Gaffigan with his wife. A few people — none of these– left the theater at intermission. They should have given Act 2 a chance. “Dead Accounts” is not doing great business right now, but it’s worth a look if for no other reason than to see NLB, who makes the whole thing come alive.

And Katie sounds like she’s living a normal life. Our host across the street at Junior’s told us later how Holmes stopped in the other night around 11pm for a piece of cheesecake to go, and three forks. “Maybe she a boyfriend,” said the young woman. You go, girl!