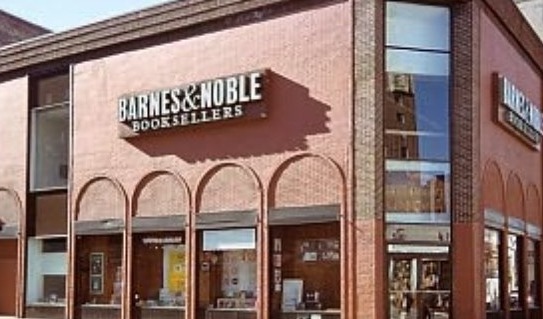 A sign has gone up in the window of the Barnes & Noble on the corner of Sixth Avenue and Eighth St: they are closing on December 31st. In the mid 1980s, Barnes & Noble swallowed up Marboro Books, Bookmasters and B Dalton, among other booksellers. They killed off small booksellers all over the country, eventually destroying business for many beloved New York landmarks like Colosseum, Books & Co., Gotham, Doubleday, and many others. St. Marks Bookstore, in its reduced form, is rumored to be downsizing and moving again.

B&N wanted to rule the world. They took over the B Dalton store at what used to be the gateway of Greenwich Village, but also added a behemoth store at 21st and Sixth (now gone), Lincoln Center (now gone), and downsized the famous main store at Fifth Avenue and 18th st. On upper Fifth Avenue, they ravaged Scribner Books, the best bookstore in New York, which became Rizzoli and is now a Benetton or some clothier. 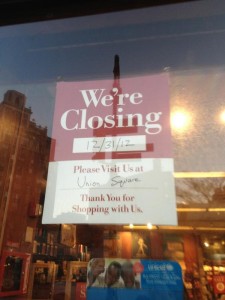 Now B&N is in such reduced circumstances that they’ve slinked (slunk?) down Fifth Avenue from their original spot near 48th St. to something far less glamorous on the east side of the street near 45th.

I was working at the B&N outpost on Third Avenue and 59th St. in 1979 when the destruction began. I was in college, and had been reassigned from Marboro on West Eighth St. when B&N bought that chain and killed it. You could see the future: at that moment, truck drivers and maintenance people had been promoted to store managers by the hippie HR guy who thought it was all very funny. No one knew anything about books. No one cared. A customer once walked into our store and asked for “books by Singer”– meaning Isaac Bashevis Singer. He was directed by our night manager to the Singer sewing store on 57th and Third.

Among the stores B&N helped coax into oblviion  was the legendary Wilentz Books on Eighth St. just a half block east of the red brick former Dalton edifice. For a while, Shakespeare & Co. has barely held on, on lower Broadway. Somehow, Three Lives Books–with different owners than the ones I knew–has clung to life in the West Village. But they are very small and off the beaten track. Otherwise, B&N has managed to wreck what used to be a thriving book life in Greenwich Village.

And now, come January 1st, there will be no book store in our neighborhood, known the world over as home to legendary writers from Mark Twain and Dawn Powell to Edna St. Vincent Millay. Congratulations to the Riggios. You ushered out an entire culture and it only took 30 years. Everything will be downloaded onto a Nook. The smell of books, the feel of them, the communal experience of choosing books from piles and stacks, has been decimated. Good work! (I can’t hold amazon accountable for this–they didn’t start with brick and mortar stores.)

I will never forget Ralphie, the manager of the Third Avenue store, who told the staff one night that if his rules were too “astringent” we could leave. There was also a sign on the freight door from the inside that read: “This door is alarmed.” So was I. And now, more than ever.