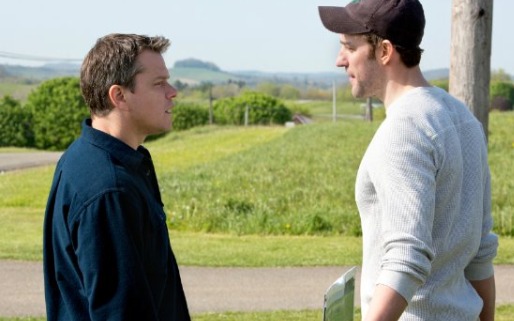 John Krasinski’s in town doing press with Gus van Sant and Matt Damon for “Promised Land,” a movie I like a lot about a small town in Pennsylvania trying to decide about fracking. More about that in a minute. Krasinski told us at lunch today that before “The Office” ends, we will see the fictional documentary that’s been shooting for the last nine seasons.

The premise of “The Office” has been that a film crew has been documenting everything going on at Dunder Mifflin. Krasinski says that before the series ends, “the documentary will be addressed.” He also said that he never would have left the series. “I owe it everything,” he said. We will miss Jim and Pam and the whole crew, but let’s face it– by now they would have all been fired or the company would have gone under.

Meantime, there’s “Promised Land” which Krasinski wrote with Matt Damon at their respective dining room tables. Since Damon has four daughters, Krasinski said he was very impressed by the Oscar winner’s focus considering that “four girls were constantly crawling all over him, and he was helping bathe and feed them.”

And lest you think “Promised Land” is anti-fracking movie, it’s not. While drilling for natural gas along the Marcellus shelf has been controversial, it’s also been financially advantageous for a lot of people needing money. “Promised Land” shows both sides.

One more thing: Krasinski says he and Damon considered for a minute having John’s wife, actress Emily Blunt, play the female lead in the film. But, John says: “Matt said she’d be perfect, then realized they’d just been in The Adjustment Bureau together.” Instead, they went with Rosemarie DeWitt, who had just co-starred with Blunt in “Your Sister’s Sister.”