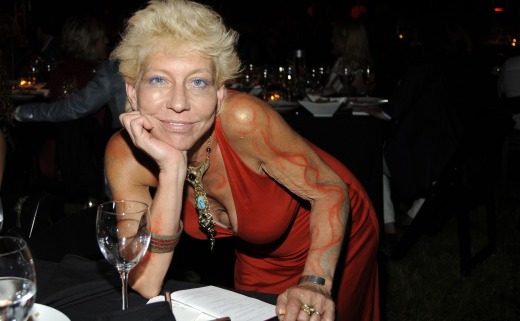 I was surprised and saddened to read of the death of Lisa deKooning tonight– in the paid obit section of the New York Times. The 56 year old only child of great Dutch born American artist Willem deKooning was listed in the Times as “Johanna” when everyone everywhere knew her as Lisa. She was a resident and regular of the Hamptons where she maintained her father’s studio. She also lived in the Virgin Islands, and that’s where she died on Friday.

Her death, according to reports, followed a fall, and is something of a mystery. It was only a little over a year ago that Lisa had an altercation with police in the Bahamas, and was arrested. She had already had a wild life, especially in the mid 1980s when she was associated with drug dealers and the Hell’s Angels.

Lisa deKooning’s mother was not Elaine deKooning, wife of the artist for 46 years until her death. Her mother was Joan Ward, with whom Willem deKooning had a separate relationship in the 1950s and 60s. Lisa was his only child. When Elaine died and then her father, Lisa became the sole heir to the great artist’s estate. She did a lot important work for her father’s legacy. With the help of attorney John Eastman (brother of the late Linda McCartney), Lisa set up a Foundation in her father’s memory. (He died in 1991.) She also helped organize his estate and art works.

In a newspaper clip from the Times long ago, one deKooning lawyer described Lisa as “free spirit.” She was certainly a unique individual, and someone who was a force and a character in the small town world of the Hamptons. She was always fun to run into at parties or events, and she was always inviting new people over to see her father’s work and her own work. She died way too young at age 56, and leaves three children.

(Lisa deKooning is the third person I knew who has died in the last few days. Getting older is not so much fun when these things happen.)