by PAULA SCHWARTZ, Special to Showbiz411— Upsets began early last night at the Gotham Awards at Cipriani Wall Street when the first award, the Audience Award, went to director Bartholomew Cubbins for his film “Artifact.” He beat out favored “Beasts of the Southern Wild” directed by Benh Zeitlin. Even Cubbins was shocked. “I feel like ‘Beasts of the Southern Wild’ should be up here with me,” he said. The movie is about the rock group 30 Seconds to Mars, fronted by musician-actor Jared Leto (“My So Called Life”).

Cubbins, in fact, is none other than Leto’s pseudonym. When Leto/Cubbins took the stage, most of the audience didn’t know what was going on. Leto is emaciated. (Editor’s note: he actually looks like a young Courteney Cox.) The musician-turned-actor-turned director was unrecognizable; he’s become gaunt for his first movie role in five years, as a transsexual in “Dallas Buyers Club.” He was so skinny that few journalists bothered interviewing him because they didn’t recognize who he was. The only give away that it was Leto was the actor’s piercing blue eyes. The actor, who was slender to begin with, dropped the weight 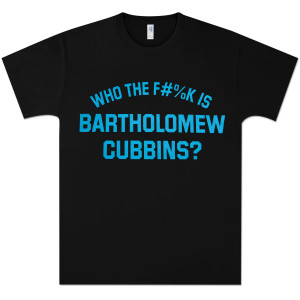 because it was essential for his part in the film as a transgendered person.

The star of “Dallas,” Matthew McConaughey, who plays a man diagnosed with HIV/AIDS, became even skinnier than Leto.  Pictures that have been circulating of the “Magic Mike” star are downright scary. Asked if people dropped like flies from hunger on the set, Leto said, “No one passed out.”

Leto explained how he prepared for the role. “I waxed my body and my entire eyebrows too. Feel if you want, nice and smooth,” Leto said, and motioned to a reporter to touch the back of his hand. “I just immersed myself in their culture and the people and I hope I can represent them as honorably as possible.”

A highlight of the evening was Matt Damon’s tribute and his very funny speech. (Also honored were Marion Cotillard, David O. Russell and Jeff Skoll of Participant Media). In the press room, the good-natured actor batted back questions that ranged from mundane to silly to surreal.

How does it feel at his still very young age to be honored for his career when he’s only, hopefully, half way through it? “I hope this is like a buoy marker. Like kind of a half-time thing and that I can do this for another 15 years. That would be cool.”

Fame can stunt some people, another journalist said. How did he guard against that?

“I have a team of people who do that for me,” he deadpanned.

Watching footage of his career tonight were there moments when he forgot what he’d done or moments that made him cringe with embarrassment. “I watch it and I just try to think, like who they don’t have a deal with? Who won’t release their footage, kind of like, ‘Those bastards!” (Clearly there was no problem getting footage from his classic ‘The Legend of Bagger Vance.’)

In his speech the actor mentioned how he got a free Calvin Klein suit early in his career. Someone asked what was his biggest fashion transformation? Was it the suit? “My wife would probably tell you that I haven’t transformed at all fashion wise. There are these things where they give you a suit, so it looks like you know what the hell you’re doing, but there are plenty of paparazzi shots of me walking around in my own clothes that prove that I have absolutely no fashion sense.”

Whose suit is he wearing tonight? “Calvin Klein again,” Damon said. “I actually forgot to say that because that was what made me think of it. I was putting it on and I saw it was Calvin Klein. You know it was another free suit. Again, that surreal part of my life.”

No, what would you do, the journalist asked? “What would I do if I were the president or if I could fly?”

As for whether it would be surreal if he and Ben Affleck — who won Oscars together in 1998 for writing “Good Will Hunting”– faced off against each other at the Oscars, Damon replied, “There’s no against at that point.”