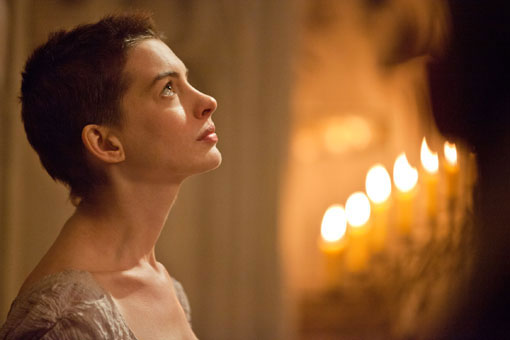 by PAULA SCHWARTZ, Special to Showbiz411–Anne Hathaway’s haunting and raw take of “I Dreamed a Dream” as the tortured waif Fantine in “Les Miserables,” Tom Hooper’s follow-up to “The King’s Speech,” is not the version Susan Boyle sang to international stardom on English television.

In a Q&A following the 7 p.m. screening Friday at Alice Tully Hall, Hathaway said, “Part of the reason why it’s not the song Susan Boyle sang is because I can’t sing like Susan Boyle.”

Hathaway, a shoo-in for a supporting Oscar nod, said the nicest thing she did for herself was that she didn’t listen to Patti LuPone’s version until she was finished filming. “And I’m so glad I didn’t because it would just have been too much. The bar for this song has been set so high by so many incredible vocalists that there’s just no way that I was going to be able to match it, so the only thing I could do was to do it differently and do it really real and really get inside of it.”

In a move that may not please “Les Miz” purists, the actress added that she thought it “was a really cool decision” by the director and the film’s writers to place the song after she’s had her first experience as a prostitute as opposed to after she’s lost her job, “because you can really get inside the pain and see the beginning of that rage she has and watch this woman shut her heart down. Victor Hugo described her as having a heart of stone with only one bit of light left at the bottom and she kept the light for her daughter, so to be able to get into the song from that perspective, I was excited about getting to do it like that.”

When asked how many takes it took to do the scene, Hathaway said 2 ½. At one point she had an earpiece problem. “I was hearing myself so loudly in this quiet space,” she said, and “everything was too close, so I just put them in so I couldn’t hear myself anymore and I let it rip, and I think that’s the one that’s in the movie.”

“Performances are often patchwork quilts of many different takes, whereas in the central songs all the songs,” Hooper said, “are one take.”

Also, if you were wondering, Hathaway’s hair–er, Fantine’s hair– was hacked off in real time.

Hooper said his experience of watching Hathaway’s hair coming off was a “slightly difference experience” from that of the actress. The make up man, an experienced and talented hair stylist, dressed as the crone, started working and Hooper said, “I watched before my eyes the most gorgeously crafted pixie cut appear,” he said, while “Annie was acting like it was a terrible trauma of her hair cut, and I was thinking this is just a creation of a lovely short haircut.” Hooper said he gave the hair guy a pep talk and told him to give Hathaway “a savage haircut. You have to make it ugly.”

Hathaway’s misery in that scene is real. “I put it up there with the most difficult things I’ve ever had to do, which I wasn’t expecting. I didn’t think I was that vain.”

During the 15-minute costume change she took a first look, where she was bald up front. “It was the worst moment ever actually, come to think of it,” she laughed, “and then it was done, and it was done, and I took a few beats and looked into the mirror and called my husband,” Hathaway said. “I said, ‘I honestly look like my gay brother.”