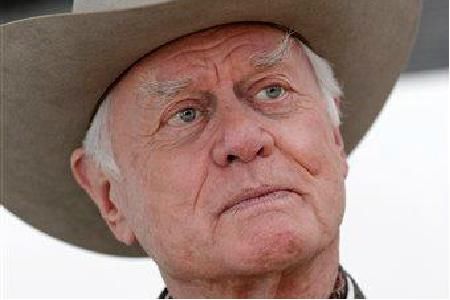 Larry Hagman has passed away at a Dallas hospital at age 81. The one and only J.R. Ewing, star of “Dallas,” looked like he wouldn’t make it much longer during the last few episods of the “Dallas” re boot. But she was still shooting new episodes until recently. I must confess to loving the original “Dallas” and Hagman especially. I was so happy to sit and talk with him and his wife Maj a few years ago in Malibu. I asked Maj about Larry’s famous tradition of staying silent one day a week. She said it drove her nuts. Larry was as charming as ever.

The son of Broadway star Mary Martin, Larry Hagman had his first hit on TV with “I Dream of Jeannie,” where he was underrated on the silly show for his physical comedy and stamina. He’s in almost every scene of the show. He appeared in various other shows and miscellaneous movies through the early 1970s, but it wasn’t until “Dallas” in 1977 that he became a household name. And then “Who Shot JR?” put him and the show on the map. My personal favorite scenes were Larry with Ken Kercheval as Cliff Barnes. JR took such delight in torturing Cliff, and Hagman was a genius at it.

It’s a sign of Hagman’s influence on “Dallas” that even though the reboot was supposed to be about the new generation, it eventually came back to J.R. Hagman, looking gaunt, persevered, and made the new series delicious as ever. It’s the death of a real star, and a real loss. Condolences to his family and fans.