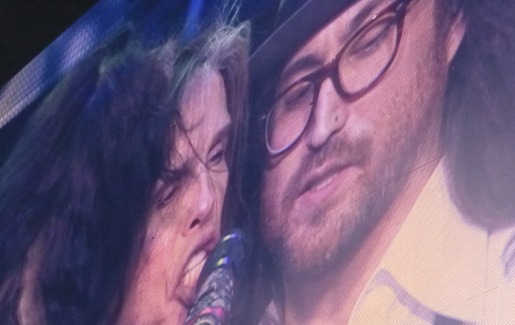 It was 38 years ago this week–Thanksgiving 1974– that John Lennon surprised Madison Square Garden and joined Elton John on stage for a couple of historic numbers. https://www.youtube.com/watch?v=2zWSJQvFTg4

Last night, by accident, Sean Lennon, John and Yoko Ono’s 37 year old son, strapped on a guitar quite on the spur of the moment and joined Aerosmith on stage at the Garden for his father’s Beatles song “Come Together.”

Sean and his girlfriend Charlotte had come to the Garden on a last minute invite from Liv Tyler, Steven Tyler’s daughter with Bebe Buell. No one had thought of the date or the meaning, and Sean had no intention on his way downtown to the Garden of playing with Aerosmith. But Tyler suggested it when he arrived, since Aerosmith had had a hit with “Come Together” years ago. Sean took to the stage with disarming confidence, and walked right into the number. The audience went wild. It was only when young Lennon was done that this reporter recalled the date to him.

Sean, an affable, pleasant young man, then recalled for the group assembled backstage–Steven Tyler and most of his family including Liv, her 7 year old son Milo, daughter Mia, son Taj, Tyler’s sister Lynda with her husband and friends, plus Liv’s mom Bebe (the unofficial First Lady of Aerosmith) and her husband Jim Wallerstein–the whole story of how Yoko Ono, separated from Lennon had sent her husband a white gardenia backstage, and they reunited after almost two years apart. (The actual reunion took place in January 1975.) “That’s when I was conceived,” said Sean, with a gentle laugh. “They probably talked right here in this dressing room.”

Lennon was impressed with how friendly and comfortable it was to play with Aerosmith. “It was very nice.” he said to Steven Tyler, who’d come off the stage after two hours of rocking the absolutely sold out Garden wild. He’s 64 years old. Tyler looked at Lennon and said, “Nice? Nice? Where was the Devil?” he joked. 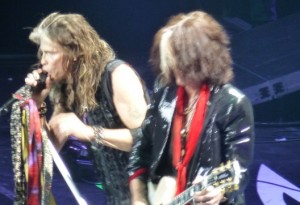 The Devil was in just about every number as Aerosmith, still with the same members after 400 years, didn’t let up for the entire show following opening act Cheap Trick. They turned the place upside down with “Mama Kin,, “Rag Doll, “Walk this Way,” “Dream On,” and “Sweet Emotion.” “You have incredible catalog,” Lennon said to Tyler. “It’s just hit after hit.”

If there were still a radio business, Aerosmith’s “What Could Have Been Love” would already be a massive hit.

But it was a night of celebration. Tyler is clean, sober, and never better. He and the band, including Joe Perry, are solid. There’s a lot of camaraderie backstage. There is no tension– and believe me, I’ve been witness to backstage travails with lots of bands over the years. Backstage is pretty much open door– with people coming and going. The shows are sold 95% right from the floor to the top top top. And when the show was over most everyone headed downtown to the Darby for an after hours party.

PS Sean Lennon has amazing stage presence, and looks terrific up there. Let’s hope he makes a commercial record soon.

Also take a look at that picture. This is what rock stars look like. Steven Tyler and Joe Perry. Perry, by the way, is writing a book with David Ritz. It will be out next fall 2013.\

Both pictures with this story c2012 Showbiz411