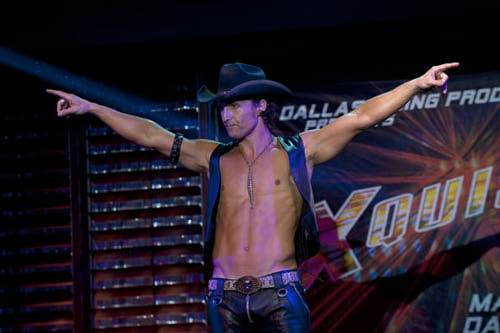 Oscar DVDs pouring in. This writer votes with the Broadcast Critics for the Critics Choice Awards (airing January 10th on the CW network). In today’s package from Warner Bros: a sealed envelope containing a letter signed by director Steven Soderbergh.

“Dear Broadcast Film Critics: I’m breaking my long standing embargo regarding pleas for recognition because the core creative team of MAGIC MIKE really hopes people are reminded at the end of the year of Matthew McConaughey’s performance as Dallas, which we found completely bananas in the best sense of the word. As he says in the film, “The moon is just a chip shot away!”

I totally agree with Soderbergh. But that first is a very long run-on, in sore need of editing. But it’s nice of him to write to us. Best Supporting Actor is a tight race this year. Robert DeNiro, Philip Seymour Hoffman, Alan Arkin, Scoot McNairy (“Killing Them Softly”), plus possible entries for Leonardo DiCaprio (“Django”) and Russell Crowe (“Les Miz”) and we don’t know anything about “Zero Dark Thirty” or “Promised Land” yet. I really liked Jim Broadbent in “Cloud Atlas.”

But into the race we will now enter M McConaughey. And who knew Steven Soderbergh worked out of New York? That was an even bigger surprise!